Spot power prices erased their early morning gains in the afternoon on Friday with a comfortable supply/ demand forecast for the weekend. Prices have continued to move down this morning with falling gas weighing on most contracts. Gas prices moved higher on Friday as Norwegian supply remained low and higher exports resulted in undersupply. However, the gas curve displays a bearish trend this morning following the return of the Troll gas field. Today's prices can also be found in an easy to read table on our 'current UK energy price' page.

Gas prices climbed higher on Friday due to weak supply levels, as a restriction on Norwegian flows into the UK and an increase in Belgian exports resulted in undersupply. Meanwhile, weak Brent helped to limit some of the losses on the far-curve, assisted by a warmer weather outlook. The power curve was dictated by weaker gas in the morning but displayed some losses later in the session as demand levels eased due to a rise in temperatures and the usual drop in industrial consumption over the weekend.

Gas prices have decreased this morning as the system was in strong supply due to improved flows from Norway. The losses were more prominent on the near curve following the end of maintenance at the Norwegian Troll field which contributed to today's over-supplied system. Downward movement on the far-curve was a result of another drop in oil, with weaker coal also a factor. Day-Ahead power has shed from its price this morning as warm weather has led to a drop in demand, the rest of the near-curve also posted losses due this healthier supply picture. Further out, most contracts ignored weaker gas and fuel and displayed gains as the market corrected some of Friday's bearish movement.

Market close data has revealed that the 1-year forward price for commercial gas moved down, while commercial electricity increased - closing at 42.52ppt and £42.85/MWh, respectively. This can be seen in the graph below. 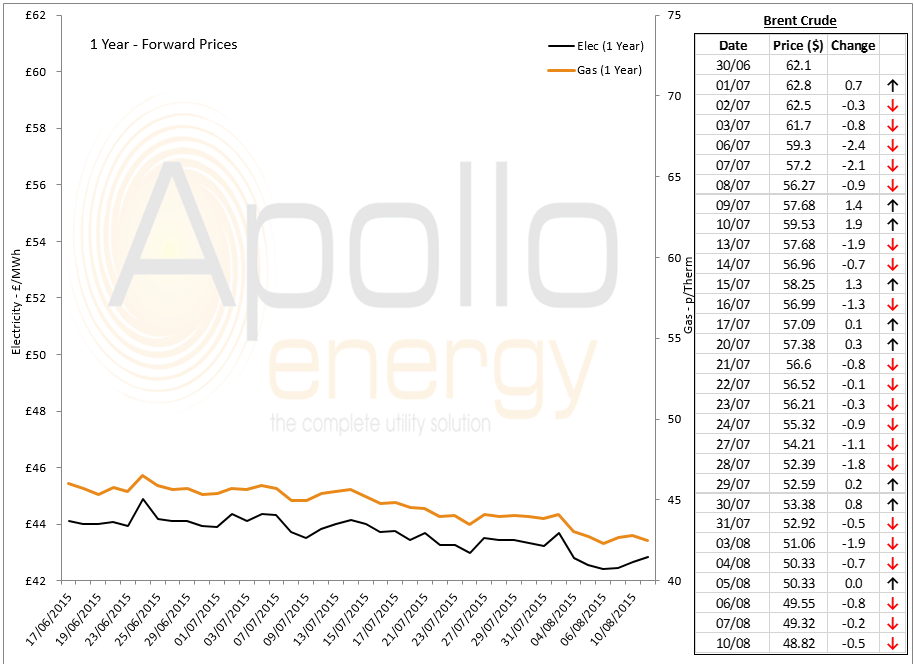 Brent 1st-nearby prices posted further losses over the weekend and now trade below $48.90/b, with strong supply in the North Sea and a rise in US production two influencing factors.