Spot power prices recorded further gains on Wednesday on the back of an expected drop in temperatures over the coming days, which should lead to a significant rise in demand. Meanwhile, wind generation levels have dropped across Europe and solar generation is also lower.
Gas prices opened the session at a premium but decreased throughout the day as the production cap at the Groningen gas facility will not be as sharp as first feared; the threshold will be lowered from 33bcm to 31bcm for the 2015 gas year. Improved BBL flows have helped to pressure down gas prices this morning, outweighing the effects of higher storage injections and rising demand; a stronger Pound and falling Brent also assisted the bears.

Gas prices eased down yesterday as the gas system became oversupplied and concerns regarding production cuts at Groningen facility were curbed somewhat. Dutch imports via the BBL pipeline increased and helped towards the long gas system, while a stronger Pound was also a factor for the downward movement.

Power contracts followed their gas counterparts on Wednesday, with weakening coal also contributing to the losses. However, the Day-Ahead contract climbed higher as wind generation is set to drop to around 1GW today.

The gas curve displays numerous losses this morning despite a short gas system, as flows are comfortable and the undersupply can be attributed to increased storage injections. Downward movement is also evident further along the curve with weakening oil prices the main market driver. Elsewhere, an LNG delivery is expected to arrive in the UK on the 14th of October.

Power prices have tracked the movement of gas once again this morning with weaker coal and oil also dragging contracts lower. Renewable generation remains quite low but wind levels are expected to improve tomorrow, helping the prompt to record a sizeable loss.

Market close data has revealed that the 1-year forward price for both commercial gas & commercial electricity decreased - closing at 41.80ppt and £42.60/MWh, respectively. This can be seen in the graph below. 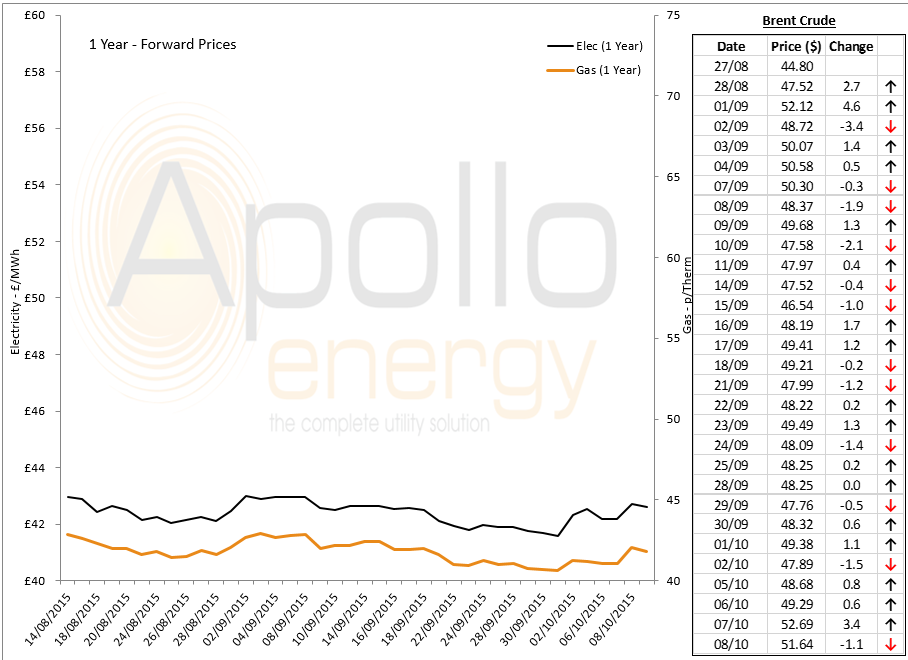 Brent 1st-nearby prices corrected downwards towards the end of yesterday's session as the latest stocks report showed a rise in US crude inventories; Brent trades just above $51.6/b this morning.