Spot power prices were fairly stable yesterday as higher demand levels were countered by much stronger supply, following a surge in renewable production. Prices initially opened higher this morning but comfortable supply could weigh on prices this afternoon. Rising consumption levels due to colder weather failed to have much effect on gas prices yesterday as healthy flows and a lower demand forecast provided bearish pressure. Demand levels are expected to rise on Monday and Norwegian output is also set to drop; gas prices should be supported this afternoon as a consequence. Today's prices can also be found in an easy to read table on our 'current UK energy price' page.

Near-curve gas prices fell lower due to comfortable supply following an increase in Norwegian gas flows. This bearish sentiment was also evident on the far-curve but the losses were less prominent as cold weather is expected this month. Day-Ahead power decreased yesterday on the back of increased wind production which offset above average demand. Further along the curve most contracts took direction from their gas counterparts and posted losses.

Gas prices moved higher this morning with Day-Ahead adding 0.90ppt to its price and the rest of the near-curve followed suit. Linepack opened slightly short and gas flows are generally unchanged, except for Langeled which saw its output fall to 59mcm. Day-Ahead power climbed £5/MWh higher this morning as wind generation is set to fall significantly on Monday. The rest of the curve displayed less noticeable gains with the highest increase around £0.45/MWh.

Market close data has revealed that the 1-year forward price for both commercial gas & commercial electricity moved higher - closing at 55.43ppt and £50.35/MWh, respectively. This can be seen in the graph below. 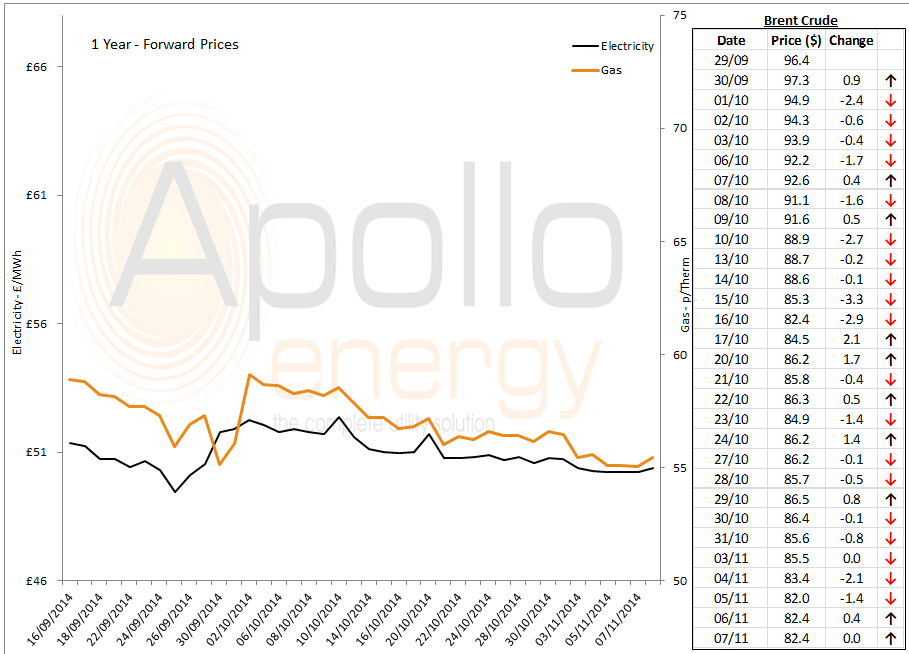 Brent 1st-nearby prices recorded another loss yesterday and display a weekly loss of over $3/b. Today's outlook remains stable-to-bearish with no major changes to fundamentals expected to influence the market.