Spot power prices saw an increase on Friday following a rise in fuel prices. The possibility of a downward correction across the carbon market may help to counterbalance the bullish pressure from rebounded fuel costs, creating a neutral outlook for the beginning of the week.

Increased tensions in Eastern Ukraine, teamed with firmer short-term fundamentals, supported European gas prices on Friday. Langeled flows dropped by approximately 17mcm/day from the previous day on Friday whilst BBL flows also fell to 5mcm/day, resulting in a tight system. LDZ consumption is expected to increase again today due to the cold weather in the UK, which has in turn pushed NBP spot prices higher.

The resurgence of tensions across the Eastern Ukraine was the main driver on Friday for increased NBP prices, as risk premiums increased again. Alongside this, Day-Ahead prices gained support from an outage at a Norwegian gas field, adding 1ppt to their cost. The remainder of the curve eased slightly despite an increase in oil prices.

Day-Ahead power prices made gains of £5/MWh on Friday on the back of higher peak demand. Wind production was weak before the weekend whilst demand levels increased slightly due to the prolonged weekend in areas of Europe.

Bullish pressure has persisted across the gas curve this morning with the increased unrest in Eastern Ukraine resulting in risk premiums being added across the curve. Alongside this, the gas system remained short this morning due to reduced Norwegian flows - the Skarv gas field however is expected to return at a reduced production rate this afternoon.

Market close data has revealed that the 1-year forward price for both commercial gas & commercial electricity moved higher - closing at 56.28ppt and £50.90/MWh, respectively. This can be seen in the graph below. 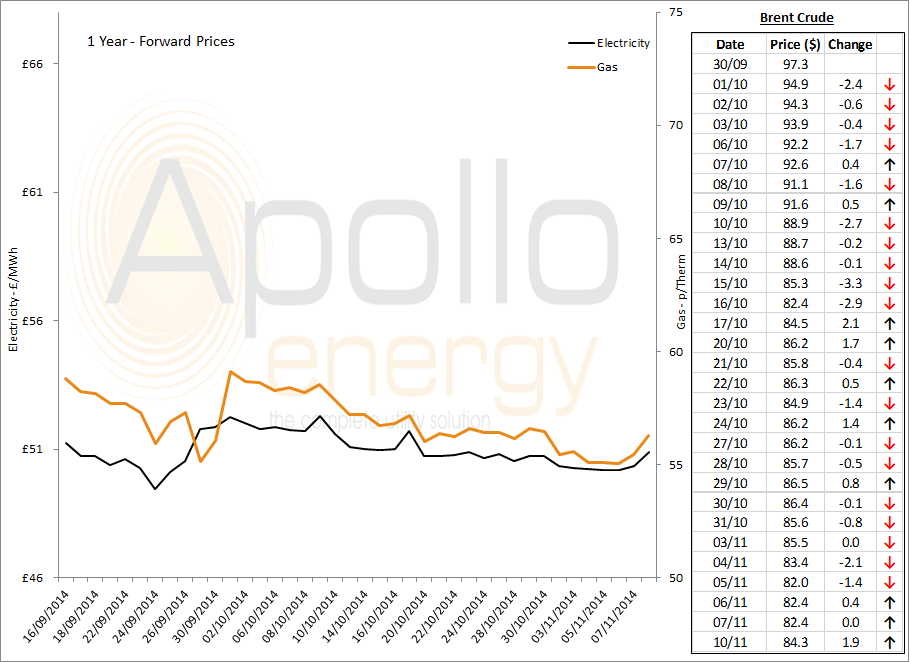 Brent-1st nearby prices have received a slight impetus this morning from renewed Libyan disruptions and Ukrainian tensions, rising to $84/b, whilst WTI also made small gains, nearing $79/b. Today's outlook is slightly bullish, but there is still a downward risk for the end of the month.