Spot prices recorded a loss yesterday following an increase in European wind production, although colder temperatures and a drop in wind for the rest of the week could support prices today. The colder weather forecast helped gas prices move higher yesterday although demand was still below the seasonal average. Today UK LDZ demand has risen by 14mcm however the UK gas system has opened long as interconnector flows have increased from 0mcm to 18mcm; bearish movement is expected on the back of these healthy supply levels. Today's prices can also be found in an easy to read table on our 'current UK energy price' page.

Gas contracts began the session with a number of price increases but as the system became more balanced most contracts ended the session lower. Day-Ahead fell by 0.55ppt as slightly colder weather was countered by an increase in gas flows, while seasonal contracts moved down due to weaker Brent. The power curve displayed similar losses to gas as February-14 and Summer-14 both shed £0.20/MWh from their price. Nuclear availability has improved following the return of a unit at the Heysham power plant which weighed on prices further. Although the expected drop in wind generation for the rest of the week restricted the bears somewhat.

The gas curve made further losses this morning as Day-Ahead opened at a 0.20ppt discount and Front-Month lost 0.30ppt thanks to a system which began the session 26mcm long. Interconnector flows were recorded at 18mcm while flows via the Rough facility also ramped up to nearly 30mcm. In other news the UK storage facility has switched to withdrawal mode. Day-Ahead power rose by £1.30/MWh and ignored the usual Friday discount as a result of a weaker wind generation forecast. Near-curve power contracts took direction from gas, while the losses were less prominent further along the curve. Meanwhile the spark spread has widened to more than £1.00/MWh for the first time since the 17th December following recent Day-Ahead power gains.

Market close data has revealed that the 1-year forward price for both commercial gas & commercial electricity decreased- closing at 66.83ppt and £52.45/MWh, respectively. This can be seen in the graph below. 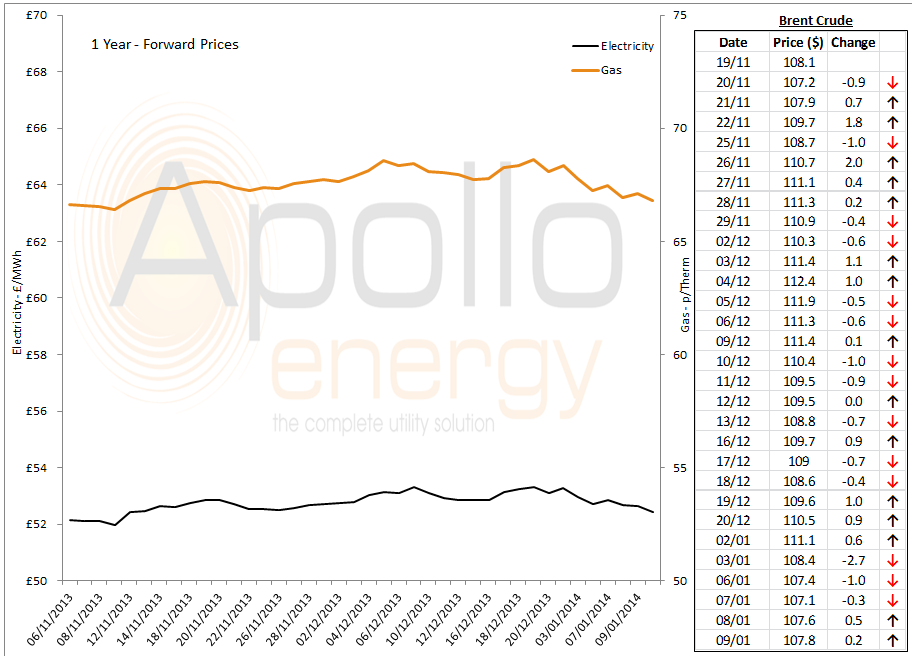