Spot prices went down as the electricity market became weaker with any tensions helped by the upturn in weather and improved hydro production. Lignite is currently less available due to unexpected outages at German thermal plants but they are expected to become operational again today. Continue reading for more in-depth energy market analysis.

Gas prices became lower throughout the day with Day-Ahead dropping the most, losing around 6ppt with demand reverting back to the season average. The LNG outlook was good and the system was well supplied which helped lower the prices across the curve. South Hook send-outs were at 25mcm with another 6 LNG send-outs expected to arrive in the UK this week. Day-Ahead power increased by £0.25.MWh intra-day which was assisted by an outage at the UK's Heysham nuclear power plant, the contract closed at £57/MWH and didn't manage to recuperate the losses is made over the weekend. The rest of the curve looked bearish and May and July contracts both lost £0.4/MWh due to the fall in gas prices.

Day-Ahead gas was bearish and stopped Front-Months making a rise this morning while further out contracts dropped more than forward contracts. Linepack started the day 10mcm long even though there was a slight drop in Norwegian flows to 68mcm at Langeled and Storage levels remain at 3% full. The front two seasons saw a slight gain whereas the rest of the power curve saw a drop, spot EUA remained above â‚¬5/tn as the market waits to hear about a major vote on back loading in the next week. CCGT upped its share of the fuel mix to 28%, rising from 5% to compensate for the low nuclear generation at present.

Market close data has revealed that 1-year forward prices for commercial gas and commercial electricity both showed a slight drop - closing at 68.83ppt and £53.50 respectively. This can be seen in the graph below. 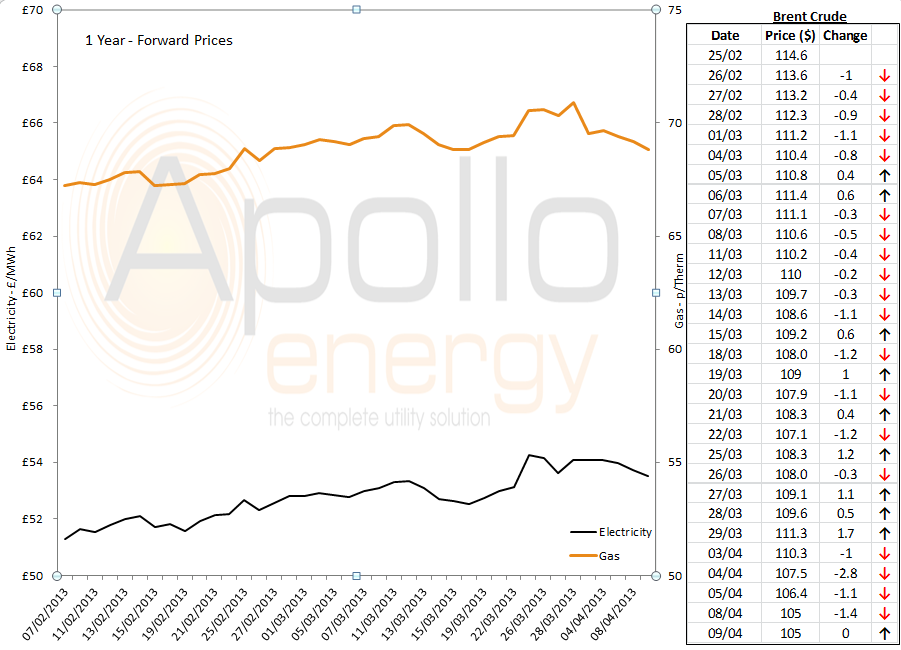 Latest Brent Crude Oil prices Brent Prices were erratic yesterday and closed up at 104.66 $/b after hitting points of 105.55, 103.75 and 103.4$/b over the course of the day making it hard to predict which way the prices will turn next. There is slight optimism regarding the financial markets with both the Euro and Dollar going up but the Eurozone has again shown concerning economic data.