Spot prices made a small gain as cooler weather temperatures resulting in higher demand was the main factor today.

Prompt contracts closed with a series of small losses with Day-ahead dropping 1.00ppt to end the session at 63.45ppt, Front-Month closed 0.25ppt down and Front-Quarter saw a drop of 0.30ppt. The Far-Curve saw little movement with seasonal contracts either showing no change or a small rise of less than 0.10ppt. There was an increase in gas flows, particularly from the South Hook terminal which led to a long system and storage levels remain at 20%. Day-Ahead power saw no movement although Front-Month made a gain of £1.55/MWh; the rest of the near curve saw very little change at closing. Further along the curve most seasonal contracts made a loss with Winter-15 falling by £0.25/MWh but Winter-13 was the exception and went up by £0.20/MWh to close at £54.20/MWh.

Prompt prices were bullish this morning as a result of a slight increase in demand due to lower weather temperatures, Front-Month however made a loss. On the Far-Curve Winter-13 fell by 0.15ppt to open at 70.95ppt, a drop of 3.5ppt from when it first took over as the Front-Season. Front-Month power shed £0.50/MWh with a drop in temperatures playing a part but despite the cooler weather forecast for summer in the UK, Day-Ahead saw a gain of £1.30/MWh. Winter-13 was helped by lower Brent prices to shed £0.20/MWh and opened at £54/MWh.

Market close data has revealed that the 1-year forward price for commercial gas kept its price while commercial electricity made a small gain - closing at 67.35ppt and £51.80/MWh, respectively. This can be seen in the graph below. 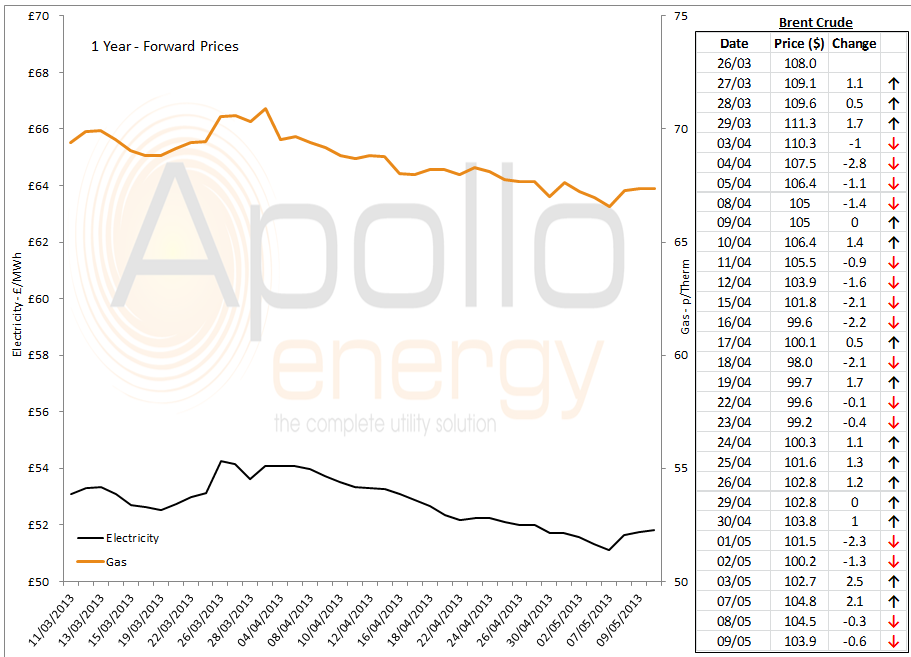 Brent crude made a loss of $0.55/bbl and currently stands just under $104/bbl as oil prices continue to drop due to healthy supply and low global demand.