After opening high spot power prices are expected to be rather bearish today with little trading activity and improved renewable generation levels, although prices could move higher on Monday on the back of cooler weather. Gas prices made a slight rebound yesterday after suffering large losses at the start of the week, with influence coming from the Ukrainian crisis. Today UK LDZ demand is expected to fall by around 8mcm and remains 3% below the seasonal norm although average temperatures have been forecast for the next two weeks; prices could inch higher on Monday as a result. Today's prices can also be found in an easy to read table on our 'current UK energy price' page.

Gas prices moved higher yesterday with Day-ahead climbing by 1.00ppt as the gas system was short and storage facilities reverted to withdrawal mode. The rest of the curve also displayed gains as June-14 increased by 0.85ppt and Winter-14 closed at a 1ppt premium. Most power contracts also moved up on Thursday with Day-Ahead rising by £0.45/MWh and Front-Quarter adding £0.35/MWh. However some seasonal contracts moved down, including Summer-16 which fell by £0.55/MWh.

Gas contracts weakened at the start of today's session as the UK gas system was balanced and overall gas flows were stronger. Increased send outs from South Hook and improved imports from the Netherlands helped towards this healthy supply picture. Further along the curve most contracts moved slightly higher due to strengthening Brent. Day-Ahead power opened £1.40/MWh higher this morning as wind generation is expected to halve on Monday and improved nuclear production offered little support to the bears. The rest of the curve displayed varied, minimal movement with stronger carbon contracts providing some support to seasonal prices.

Market close data has revealed that the 1-year forward price for both commercial gas & commercial electricity moved higher - closing at 59.21ppt and £50.30/MWh,respectively. This can be seen in the graph below. 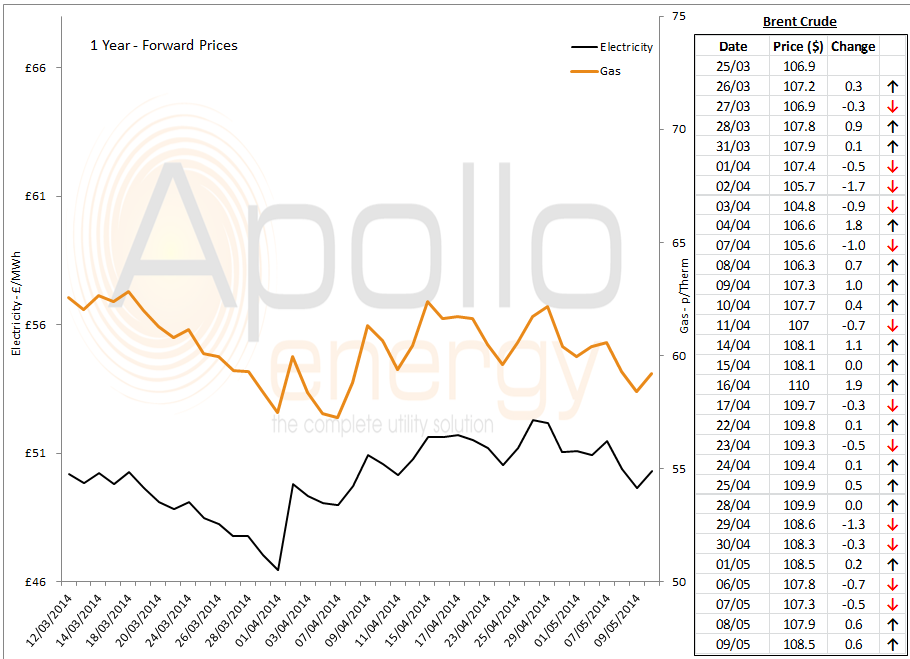 Brent 1st nearby prices sat just above $108/b yesterday with bullish influence coming from concerns in Ukraine and reduced supply in Libya. Meanwhile, WTI lost $0.50/b and trades at $100.4/b this morning.