Spot power prices are expected to follow a bearish trend for the time being as fundamentals are healthy, with a warmer weather outlook for this week as well as comfortable renewable generation. Gas prices moved down on Friday as an improved weather forecast and weaker oil assisted the bears. However, the rise in temperatures is expected to be short-lived with another cold stint expected towards the end of the week. The UK gas system has also opened short due to higher exports and a drop in LNG send-outs; prices could increase as a result. Today's prices can also be found in an easy to read table on our 'current UK energy price' page.

Gas contracts decreased on Friday due to an expected drop in demand on the back of warmer temperatures, with further downward pressure coming from weaker oil prices. A strengthening British Pound also helped to weigh on prices, although outages in Norway supported the weekend contract. Power prices followed the downward movement of gas with a stronger Pound, on the back of the UK election result also a factor. A stronger wind generation forecast helped the Day-Ahead contract record a loss, while seasonal contracts were pressured down by a weaker demand outlook.

UK demand levels are expected to fall to their lowest point in 2015 so far today and this has helped near-curve gas prices open at a discount. Further along the curve, weaker fuel prices provided some bearish pressure but the movement was minimal. Like gas, power contracts were stable-to-bearish this morning, with a weaker demand forecast for the coming days and healthier renewable generation restricting any upward movement.

Market close data has revealed that the 1-year forward price for commercial gas recorded a loss, while commercial electricity increased slightly - closing at 47.35ppt and £45.18/MWh, respectively. This can be seen in the graph below. 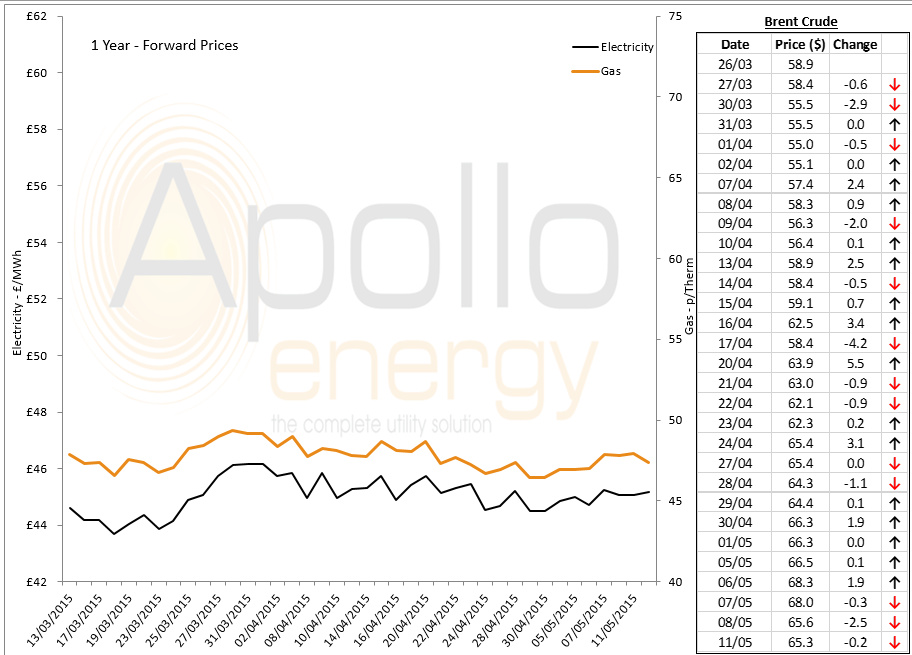 Brent 1st-nearby prices are generally stable this morning after posting a large loss on Friday and currently trade just below $65.5/b.