Spot power prices are generally bullish this morning, although renewable generation is set to improve over the weekend, levels will still remain below average, while a cold weather forecast has provided further upward pressure.

Gas prices moved higher yesterday as an expected drop in temperatures will lead to rise in demand, with residential consumption already showing an increase in European countries. Further gains have been posted this morning with support coming from strengthening Brent and next week's weather forecast.

Gains were displayed across the near gas curve on Thursday as rising demand levels and an undersupplied system supported the prompt; BBL flows fell to 0mcm at the beginning of the session which was a major factor for the short system. Further out, prices were influenced by an increase in Brent.

Power prices also strengthened yesterday and were pushed higher by the rising gas market. Prices were rather stable at the start of the session but Front-Month contracts soon followed their gas counterparts with a higher demand outlook, a weaker Pound and an increase in Brent offering support.

A strong rise in oil prices has supported the gas curve this morning with previous bullish factors also still in play. Temperatures are set to fall below the seasonal norm next week which will lead to higher residential demand; temperatures of 2 °c below average are expected in the UK on Monday.

The power curve continues to turn to rising fuel costs for support, with gas, oil and coal contracts all displaying sizeable gains. A colder weather forecast has also offset an expected uptick in renewable generation this weekend and the prompt has posted a gain of £0.40/MWh.

Market close data has revealed that the 1-year forward price for both commercial gas & commercial electricity increased - closing at 42.10ppt and £42.98/MWh, respectively. This can be seen in the graph below. 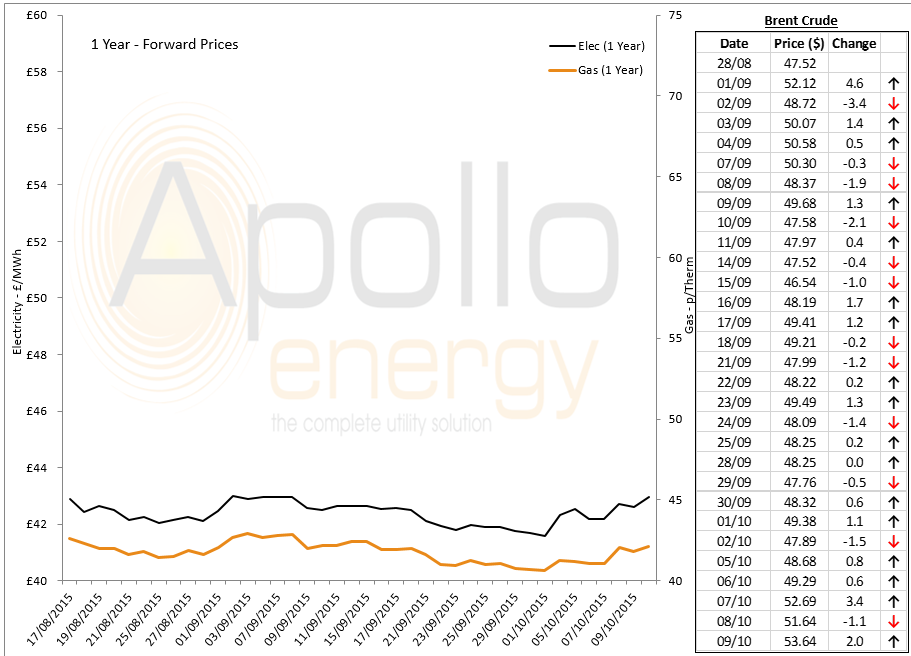 Brent 1st-nearby prices have displayed another significant increase, rising by almost $1.7/b yesterday afternoon to trade at $53.64/b this morning. Traders chose to ignore the rise in US oil production and instead focused on the on-going tensions in the Middle East.