Spot prices moved higher yesterday following a low wind generation forecast and a drop in conventional power availability could see prices continue to rise today. Higher gas flows and LNG output helped prices make a loss yesterday, a stronger Pound against the Euro and weaker oil prices also assisted the bears. UK LDZ demand is expected to rise by 8mcm today and is currently 5.4% above the seasonal average. Cold weather is expected over the weekend and Norwegian output is predicted to fall by over 10mcm, prices should climb higher as a result. Today's prices can also be found in an easy to read table on our 'current UK energy price' page.

Prices along the far-curve fell significantly following another drop in Brent prices with seasonal contracts falling by around 0.30ppt. Near-curve prices also moved down as linepack remained long throughout the day and supply levels were healthy. Day-Ahead shed 1.50ppt from its price and Front-Month decreased by 0.60ppt. The power curve also saw contracts close at a discount but the losses were less prominent. The return of a 1.3GW nuclear power plant helped improve supply levels which led to Day-Ahead decreasing by £0.20/MWh. Further along the curve, on-going talks regarding carbon back-loading helped seasonal contracts move higher.

The gas curve rebounded after yesterday's losses with Day-Ahead adding 0.65ppt to its price and other near-curve prices rising by up to 0.20ppt. A short system and increased demand gave support to the bulls at the opening of today's session. Brent prices continue to weaken but this failed to influence contracts further along the curve. Day-Ahead power rose by £1.00/MWh due to the usual rise in demand on Mondays while the two Front-Months ebbed down slightly. Wind Generation is over 12GW today and currently holds an 8% share of the generation mix as conventional power generation fell. Seasonal contracts saw mixed movement with Winter-15 increasing by £0.25/MWh and Summer-16 opening £0.20/MWh lower.

Market close data has revealed that the 1-year forward price for both commercial gas & commercial electricity made a loss - closing at 66.43ppt and £51.97/MWh, respectively. This can be seen in the graph below. 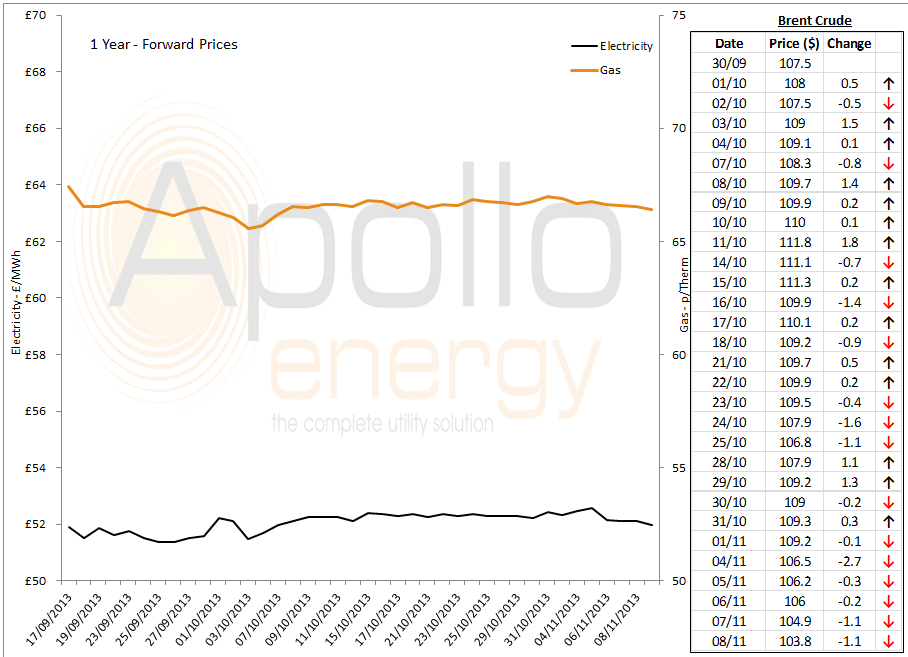 Brent 1st-nearby prices saw a decrease of $1.8/b as Oil prices made yet another loss due to the US Dollar strengthening against the Euro. Meanwhile Front-Month Brent fell below $103/b this morning for the first time since July.