Spot prices held firm on Friday as higher wind generation was expected to counter a slight drop in nuclear availability. Prices ticked higher this morning with stronger oil prices and an increase in demand being the main influences on today's market. Gas prices also showed little movement at the end of last week and failed to take much direction from a drop in Norwegian output which resulted in a short system. Today prices have made gains as colder weather has resulted in higher UK LDZ demand. Today's prices can also be found in an easy to read table on our 'current UK energy price' page.

Day-Ahead gas showed little change on Friday despite the UK system reaching 18mcm short due to a decline in Langeled flows which fell by around 50mcm in the afternoon. The rest of the gas curve saw mixed movement with Front-Month rising by 0.10ppt, while quarterly and seasonal contracts made a loss. Power contracts also showed mixed sentiment with Day-Ahead climbing £1.00/MWh higher and January-14 shedding £0.25/Mwh from its price. Seasonal contracts only registered minor changes, moving by as much as £0.05/MWh. Meanwhile, increased wind generation this week is expected to offset the continued shutdown of a 500MW nuclear reactor.

Gas prices made gains at the opening of today's session due to a short system and an increase in demand on the back of colder weather. There are no LNG deliveries expected to arrive in the UK in the near future which has seen front-month contracts shoot up. Further along the curve stronger Brent prices led to an increase in seasonal contracts which also took direction from near-curve prices. Front-Month power opened higher with a low wind generation forecast and a drop in temperatures the main driver of prices. Day-Ahead was the exception on the power curve and was the only contract to open lower, falling by £3/MWh as a result of strong wind production today. Far-curve contracts followed their gas counterparts and stronger oil prices and also made gains.

Market close data has revealed that the 1-year forward price for both commercial gas & commercial electricity moved higher - closing at 66.83ppt and £52.45/MWh, respectively. This can be seen in the graph below. 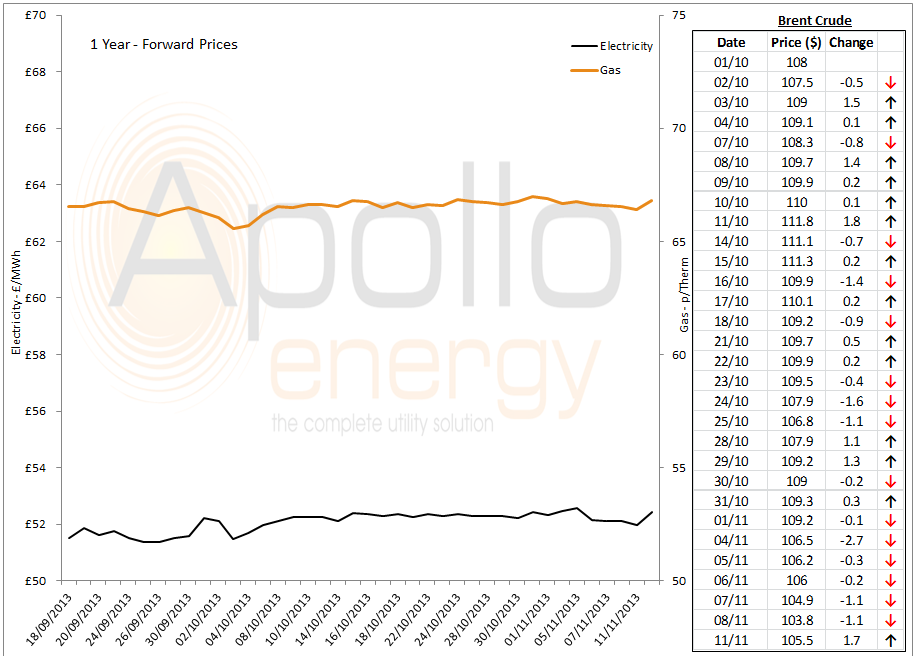 Brent 1st-nearby prices opened at $105.45/b this morning, an increase of $1.91/b over the weekend. A breakdown in talks regarding the Iranian nuclear programme is thought to be one of the main factors for this increase.