Spot prices climbed higher yesterday following a drop in temperatures leading to increased demand, elsewhere wind and nuclear generation also declined. The UK gas system was over-supplied yesterday due to strong European output and increased storage withdrawals. Today UK LDZ demand has risen by 4mcm and residential demand is set to increase further over the weekend due to the slightly colder temperatures at present, although milder temperatures are expected for the middle of January. Interconnector flows into the UK have ceased while there should be little change to storage withdrawals; gas prices could display a bullish trend today as a result. Today's prices can also be found in an easy to read table on our 'current UK energy price' page.

The gas curve displayed further losses yesterday as Day-Ahead decreased by 0.85ppt and Front-Month recorded a 0.55ppt loss. Linepack was long throughout the session and flows via the interconnector and Langeled were healthy. Day-Ahead power closed at a £0.25/MWh premium and was the only contract to move higher yesterday. Day-Ahead's price increase was the result of the delayed restart of a unit at the Heysham nuclear facility. Further along the power curve, contracts decreased by as much as £0.60/MWh while February-14 shed £0.45/MWh from its price on the back of a milder weather forecast.

The UK gas system was balanced this morning which led to Day-Ahead opening the session unchanged while the rest of the curve moved down on the back of a warmer weather forecast for the end of this month and the start of February. Storage levels are healthy for this time of year which also supported the bears while weaker Brent was also factor. On the power curve Day-Ahead climbed £2.75/MWh higher and opened today's session at £50.75/MWh due to increased demand levels. Wind production is also expected to weaken which also helped Day-Ahead move down. The rest of the curve took direction from lower carbon and APi2 coal prices.

Market close data has revealed that the 1-year forward price for both commercial gas & commercial electricity decreased- closing at 66.41ppt and £52.38/MWh, respectively. This can be seen in the graph below. 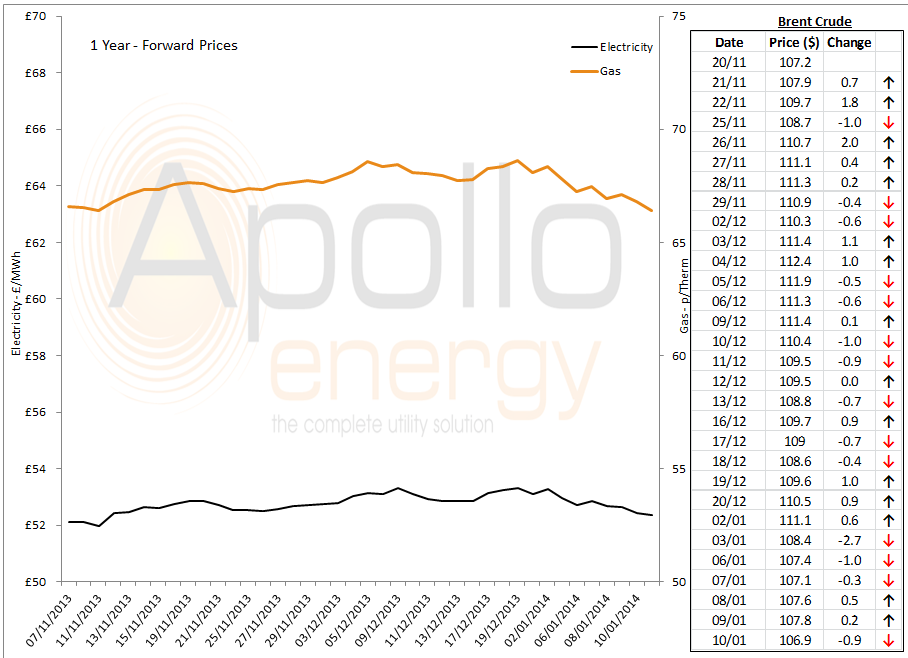 Brent 1st-nearby prices fell by $0.76/b yesterday and reached a 2-month low of $106.12/b, however prices have climbed back to $106.8/b this morning. WTI hit a 7-month low of $91.2/b following a $3.78/b decrease, improved production in the Middle East and strong Chinese economic data are the main drivers at present.