Average demand levels this week were slightly higher than before the Christmas holidays, averaging 43.7GWh compared to 40.4GWh (week commencing 15/12/2014). However, these levels are still below average for this time of year as temperatures remain rather mild. Wind generation displayed moderate levels with a weekly average of 4.6GWh although peak generation is expected to rise to around 7.5GWh over the weekend. Some areas of the country are expected to see wind speeds of up to 100mph. Coal and nuclear generation is relatively unchanged from their levels prior to Christmas, averaging 14.2GWh and 7.9GWh, respectively. Meanwhile, gas fired-generation is slightly lower, averaging 7.9GWh compared to 8.8GWh in our last analysis.

The average opening price for Day-Ahead power was extremely low this week (£38.56/MWh) as fuel prices continue to plummet with oil prices reaching their lowest price since May 2009 earlier in the week. 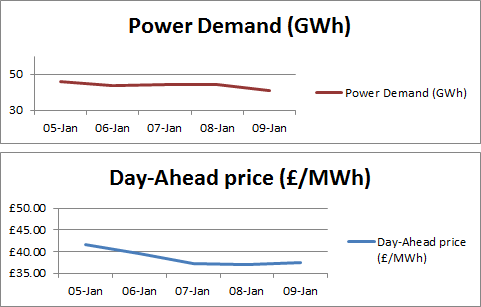