Spot power prices moved down on Friday but gains have been posted this morning following a reduction in nuclear availability, lower wind generation and strengthening gas. Improved flows from Russia helped gas prices decrease on Friday with further assistance from a drop in demand and healthy LNG supply. Temperatures are currently mild and demand levels have dropped as a result but a temporary cold spell has been forecast at the end of the week which has pushed prices higher. Today's prices can also be found in an easy to read table on our 'current UK energy price' page.

Gas contracts shed from their price on Friday on the back of a long UK gas system, strong LNG flows and a milder weather forecast. Temperatures are expected to remain mild for the majority of March which helped losses spread further along the curve. Weaker gas was the main driver of power prices on Friday and losses were observed across the curve. A forecast of warmer weather over the weekend weighed on the near-curve, while wind generation was also expected to remain strong.

Gas prices have opened at a premium this morning as Norwegian gas flows are reduced due to an outage at the SEGAL pipeline. A slight drop in temperature is expected later in the week which has also provided support but a number of LNG deliveries are expected this week, restricting the gains. Wind generation is currently healthy but is expected to drop later in the week and industrial demand is forecast to rise to average levels, supporting prices this morning. Despite this weaker supply forecast, overall fundamentals are currently healthy and any upward movement was minimal.

Market close data has revealed that the 1-year forward price for both commercial gas & commercial electricity increased - closing at 47.40ppt and £44.40/MWh, respectively. This can be seen in the graph below. 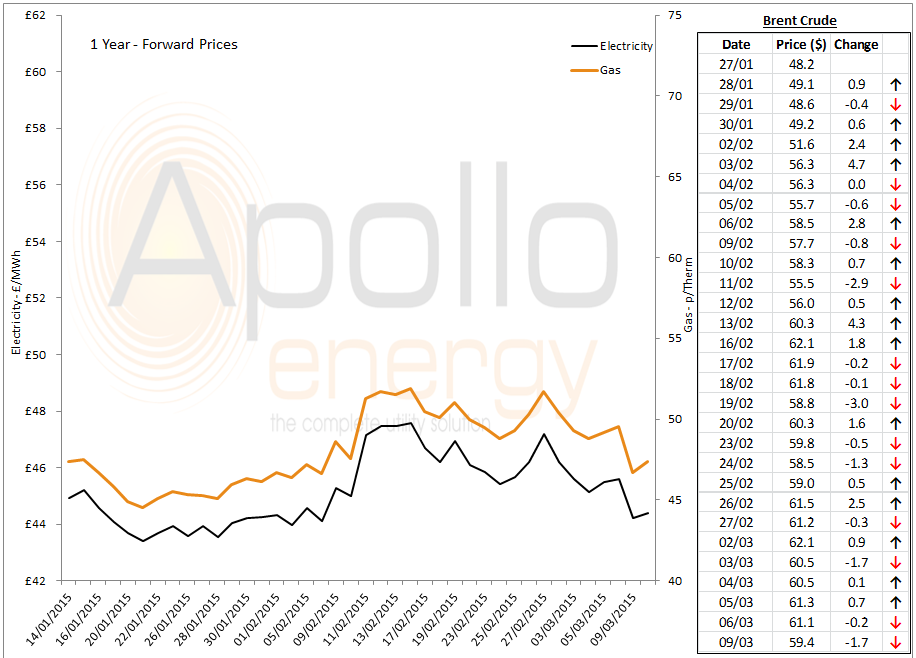 Brent 1st-nearby prices currently trade below $60/b with sizeable losses posted at the end of Friday's session as the US Dollar as hit an 11 year high.