Spot power prices climbed higher yesterday as a slight drop in temperatures is expected later in the week which should lead to a rise in demand. However prices have decreased this morning as fundamentals are currently healthy. Gas prices were also bullish during Monday's session and were also influenced by the revised weather forecast. Fundamentals are generally unchanged today but it has been confirmed that the expected cold stint will only last for a few days and combined with scheduled LNG deliveries, prices have moved down. Today's prices can also be found in an easy to read table on our 'current UK energy price' page.

Price increases were evident across the gas curve on Monday as traders attempted to correct last week's losses on the back of an expected drop in temperatures at the end of the week. The UK gas system was also short for most of the day due to an increase in exports to Belgium and a drop in imports from Holland. Power prices were pushed higher by strengthening gas and a revised weather forecast which should result in higher heating demand. Wind generation improved throughout the session which helped to limit gains on the prompt contract but peak levels were still 1.5GW lower than expected.

The majority of gas prices have shed from their price this morning as above average weather is expected to return next week and overall supply levels are healthy. Weaker Brent and coal have also helped to weigh on contracts further along the curve. Healthy fundamentals have helped power contracts to open at a discount this morning with further influence coming from lower gas prices. Generation levels are stable and the cold weather which has been forecast for the end of the week is not expected to last.

Market close data has revealed that the 1-year forward price for both commercial gas & commercial decreased - closing at 46.98ppt and £44.30/MWh, respectively. This can be seen in the graph below. 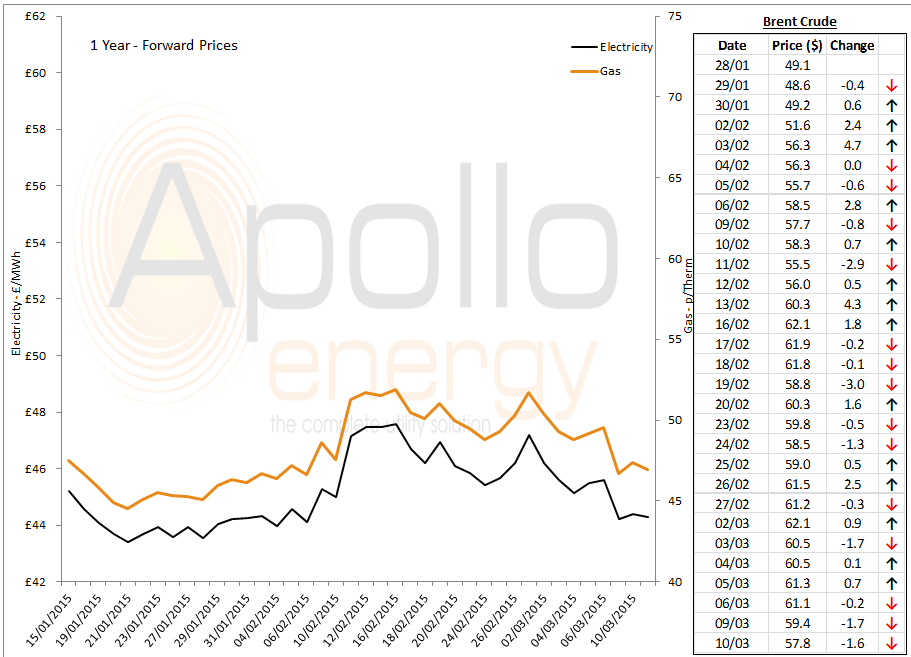 Brent 1st-nearby prices have recorded further losses and have dropped below $59/b this morning. The outlook for oil prices is unclear at present and traders are waiting on the release of this week's API and EIA reports.