Spot prices continue to look bearish due to a rise in temperatures which are affecting consumption levels. The voting in regards to backloading remains one of the big issues at present with an EU Parliament member who is part of the European People Party indicating that a large percentage of EPP members would vote against the European Trading Scheme's proposal.

The gas price closed at 72.7ppt, the lowest closing price since late February but this was still above last year's average price for April. Far Curve prices were mixed with summer contracts continuing to look show little change and winter contracts softening due to Brent becoming weaker. Also, flows through the Bacton BBL pipeline and the interconnector have decreased lately as a result of the warmer weather. Front-Month prices for power rose as a result of gas prices making gains although Day-Ahead dropped by £0.20/MWh and closed at £56.25/MWh due to lower demand for heat and a warmer weather forecast.

Day-Ahead gas fell by 0.9ppt and opened at 71.8ppt, the recent drops in price are a result of the warmer temperatures. The curve looks unbalanced at present as the far curve is lower than it should be whereas the prompt is too high to give UK storage tanks a chance to receive a long term injection, Rough is also expected to be offline for the next 2 days due to maintenance. 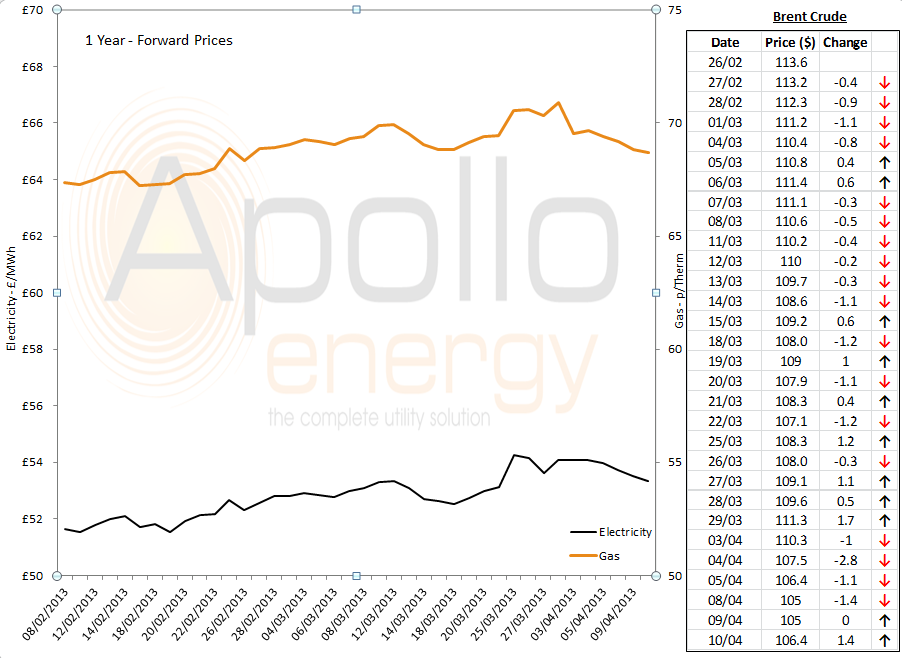 Power prompt prices remained around the same level despite gas prices falling and on the Far-Curve seasonal prices received a boost because of the prompt's lack of change and a rise in Brent. Coal and gas fired generation is still being heavily relied on and wind availability is low which has made up for any losses which have occurred because of the improved weather and reduced heat demand.

Market close data has revealed that 1-year forward prices for commercial gas and commercial electricity both showed another slight drop - closing at 68.70ppt and £53.35 respectively. This can be seen in the graph below. Note: Brent Crude prices are taken from opening market data, and do not represent the price as it changes throughout the day.