Spot prices were still rather weak today due to the public holidays and cooler weather which led to lower demand than normal for this time of year. The French market was still well supplied due to hydro production continuing to reach high levels, wind generation was still low in Germany but thermal and solar generation was healthy.

The gas curve saw numerous losses with Front-Month dropping by 0.45ppt; the bearish trend was thanks to a well-supplied system. The on-going maintenance in Norway has not hampered supply levels with Linepack remaining long for most of the session yesterday and there were flows of over 50mcm at South Hook. The power market also made losses with Day-Ahead shedding £0.10/MWh and July-13 falling by £0.55/MWh. Most contracts on the far-curve kept their price as a result of a fall in Brent prices but August-13 managed to make a gain on £0.25/MWh.

There was no clear trend on the gas curve as the market opened with mixed movement; Front-Month fell by 0.35ppt whereas Day-Ahead made a rise of 0.15ppt. The Interconnector is still set to export mode and the Zeebrugge/NBP spread was 1.20, LNG flows still have a healthy share of the supply mix and the system opened at 13mcm long. Storage withdrawals saw no change and the current market is allowing storage facilities to take advantage and increase their inventory levels. The power curve saw bearish movement apart from seasonal contracts, the three Front-Months fell by around £0.45/MWh and Winter-14 went up by £0.10/MWh. Wind generation is forecast to increase on Monday but this is expected to be short lived and will drop off as the week goes on.

Market close data has revealed that the 1-year forward price for commercial gas & commercial electricity both made losses - closing at 67.23ppt and £51.53/MWh, respectively. This can be seen in the graph below. 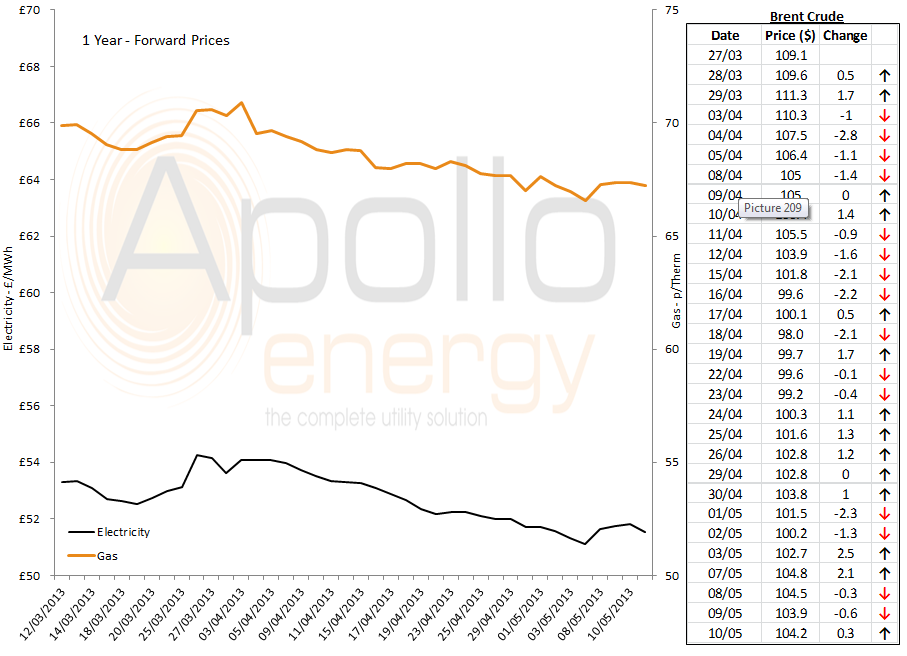