Renewable energy production was strong over the weekend but prices have opened higher this morning following a drop in wind generation. This afternoon prices are expected to remain quite stable although bearish tension cannot be ruled out due weaker coal prices. Gas prices fluctuated on Friday with most contracts recording small gains by the end of the session. Temperatures are expected to rise above the seasonal average later in the week and prices could take a downward direction as a result. Today's prices can also be found in an easy to read table on our 'current UK energy price' page.

The gas curve displayed a series of gains on Friday which ranged from 0.15ppt for July-14 to 0.80ppt for Day-Ahead; cooler weather over the weekend was the main market driver. Mixed movement was displayed further along the curve with Winter-14 climbing 0.45ppt higher and Winter-15 falling by 0.20ppt. Day-Ahead power rose by £0.50/MWh by the end of Friday's session as demand levels were higher over the weekend, while lower interconnector capacity also offered support. Most contracts on the near-curve weakened although the losses were minor. The far-curve failed to show any sort of trend with Winter-14 closing at a £0.20/MWh discount and Summer-15 making a £0.10/MWh gain.

Gas contracts opened lower this morning thanks to healthy supply and temperatures which have reverted back to the seasonal norm, thus lowering demand. Day-Ahead fell by 0.80ppt and Front-Month displayed a 0.55ppt price-drop as Langeled flows rose to 27mcm and an LNG delivery arrived at South Hook on Sunday. On the power curve Day-Ahead added £0.80/MWh to its price and ignored the movement made by its gas counterpart and instead took direction from the low wind generation levels expected this week. The rest of the curve saw varied movement as Q4-14 decreased by £0.65/MWh and Summer-14 opened £0.10/MWh higher.

Market close data has revealed that the 1-year forward price for both commercial gas & commercial electricity decreased - closing at 58.69ppt and £49.98/MWh,respectively. This can be seen in the graph below. 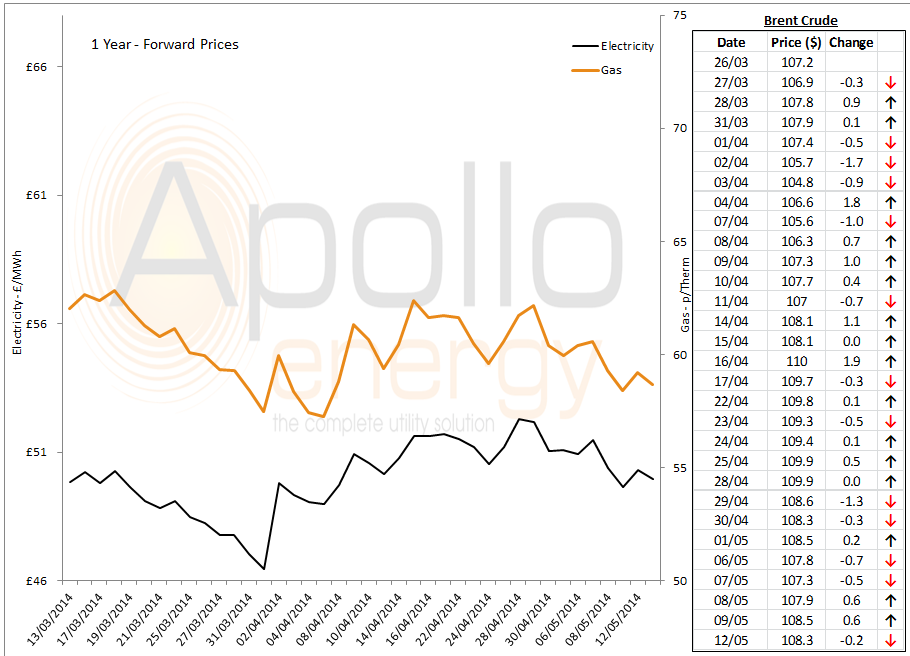 Note: Brent Crude prices are taken from opening market data, and do not represent the price as it changes throughout the day. Latest Brent Crude Prices Brent 1st-nearby prices are currently trading at around $108.3/b with influence coming from the situation in Ukraine. Meanwhile, WTI stands at around $100/b which has taken the Brent/ WTI spread to -$8/b.