The power market has strengthened over the weekend with scheduled maintenance at numerous plants an influencing factor, while the UK gas system was stable on Friday and resulted in an increase in storage injections. However gas prices are higher this morning as temperatures are expected to drop this week and the Karsto terminal is set to undergo maintenance. Today's prices can also be found in an easy to read table on our 'current UK energy price' page.

Near curve gas contracts went up with planned maintenance the main driver of prices, while bullish Brent helped contracts further along the curve climb higher. The Norwegian Karsto processing plant went offline on Saturday and should remain offline until the end of September which will withhold 55mcm from the system. The Rough storage facility is also offline until the 23rd September which also helped prompt contracts close at a premium. Day-Ahead power went up by £1/MWh as demand is expected to rise on Monday and wind production is expected to decline. Front-Month climbed to £49.40/MWh on the back of higher gas and carbon prices.

Prompt gas contracts fell this morning as the system opened 21mcm long and flows via the St Fergus and Langeled terminals were healthy. A further LNG delivery is expected in September which also helped most gas contracts move down while Winter-14 and Summer-15 made gains thanks to stronger Brent prices. Front-Month power opened £0.10/MWh higher due to the increase in Brent Crude while seasonal contracts also strengthened with Winter-13 adding £0.30/MWh to its price. The system buy-back price reached £123/MWh as several CCGT units were brought online although the Day-Ahead contract saw no movement.

Market close data has revealed that the 1-year forward price for both commercial gas & commercial electricity went up - closing at 67.85ppt and £52.15/MWh, respectively. This can be seen in the graph below. 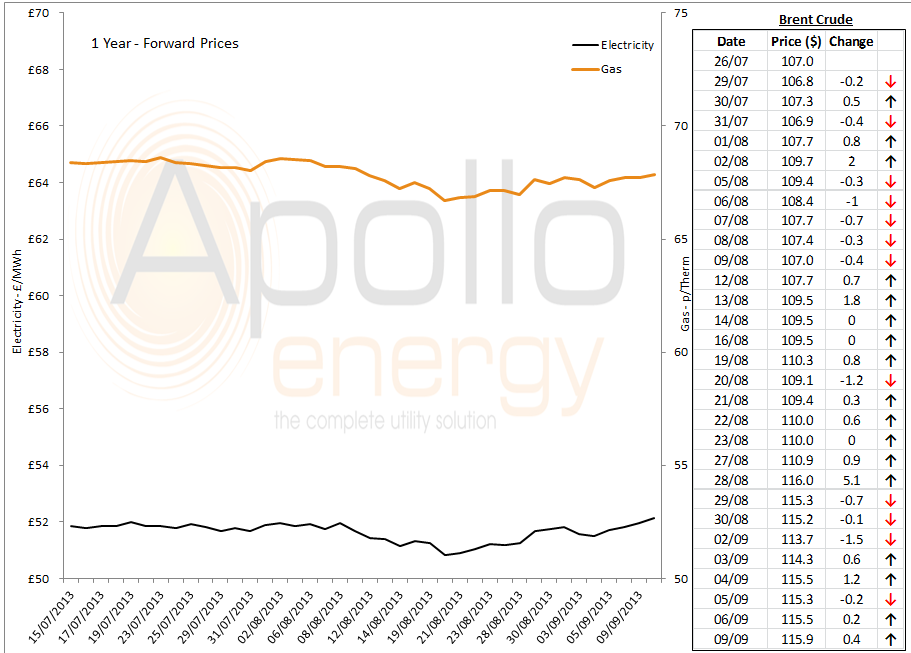