The prompt market saw contracts weaken yesterday following an increase in supply levels while nuclear production has also improved. The UK gas system tightened yesterday following higher demand, weaker UK production due to a drop in BBL flows and a series of outages at facilities. Norwegian output has improved this morning as the 24 hour maintenance at the Dornum terminal was completed which could lead to a decrease in October-13 prices. Today's prices can also be found in an easy to read table on our 'current UK energy price' page.

Near -curve gas contracts strengthened by the end of yesterday's session due to an increase in demand and unexpected maintenance at the Teeside facility. Brent Crude registered a $1.05/bbl loss and the UK pound stabilised against the Euro which influenced seasonal contracts. A further LNG shipment arrived last week which saw stock levels at the South Hook terminal increase from 30% to 58%. Day-Ahead power went up by £0.50/MWh by the end of the day while the rest of the near-curve took direction from gas. In contrast, seasonal contracts ignored the price drops displayed by Brent and gas and made gains.

Day-Ahead gas rose by 0.40ppt this morning due to continued maintenance at the Karsto facility which led to a decline in Norwegian flows and temperatures have dropped below the seasonal average. Further along the curve changes were minimal despite a significant drop in Brent prices as the US attack on Syria is looking less likely. On the power curve, Day-Ahead went up by £1.90/MWh with an increase in more expensive gas-fired generation thought to be the cause of the gain. The rise in demand which led to an extra reliance on gas-fired generation was slightly countered by improved wind production while contracts on the far-curve made losses thanks to bearish Brent and APi2 coal.

Market close data has revealed that the 1-year forward price for both commercial gas & commercial electricity decreased - closing at 67.68ppt and £52.00/MWh, respectively. This can be seen in the graph below. 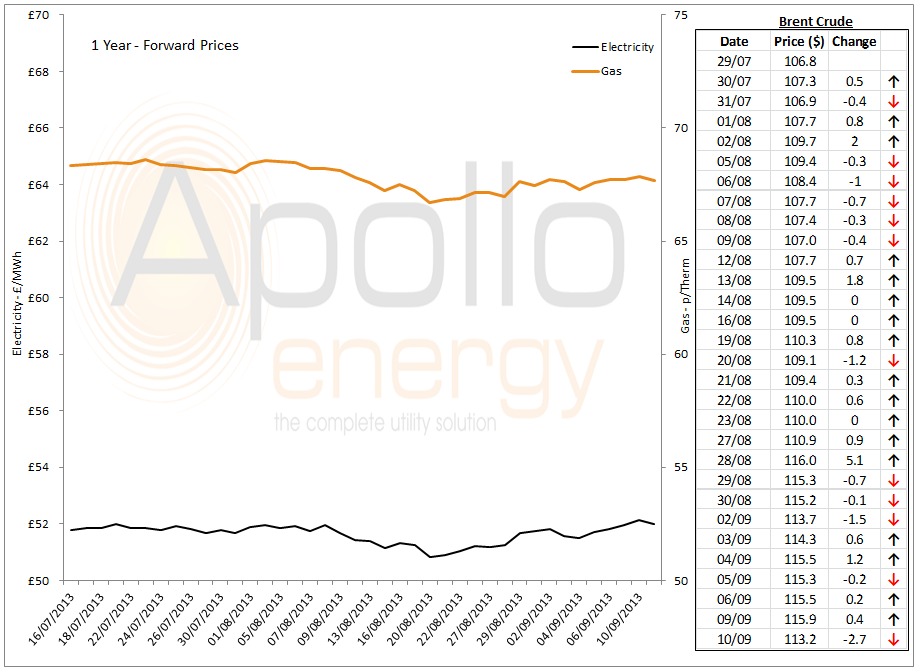 Brent 1st-nearby prices fell to their lowest point in the last seven days and opened at $112.7/b as supply concerns have lessened in Syria due to Russia's plan to seize any chemical weapons in the country.