Spot prices moved higher yesterday following a drop in wind generation and a number of outages at power plants. Prices fell slightly on the far-curve and took influence from a drop in carbon prices. Gas prices decreased on the back of milder temperatures which led to gas demand falling by 16%. The UK system was well supplied despite zero interconnector flows and no storage withdrawals. Today UK LDZ demand has risen by 7mcm but remains 9.3% below the seasonal average while Langeled flows have fallen below 45mcm this morning. However the weakened supply picture should be offset by above average temperatures which could help prices move down. Today's prices can also be found in an easy to read table on our 'current UK energy price' page.

Day-Ahead gas climbed 0.55ppt higher yesterday despite a long system throughout the session, while Front-Month closed at a 0.05ppt discount due to lower demand as a result of milder temperatures. The rest of the near-curve showed no change while further along contracts displayed losses ranging from 0.10ppt to 0.50ppt. Prompt power contracts added to their price during yesterday's session with Day-Ahead rallying £1.80/MWh following a strong day of auctioning. On the far curve contracts were bearish and took influence from gas and weaker Brent.

On the gas curve Day-Ahead rose by 0.05ppt due to a drop in Langeled flows, decreasing from 72mcm to 48mcm. Meanwhile above average temperatures helped other near-curve contracts shed from their price. Far-curve prices strengthened this morning despite the British Pound strengthening against the Euro. Day-Ahead power opened £0.60/MWh higher while the rest of the near-curve opened at a small discount. The losses ranged from £0.10/MWh for January-14 to £0.30/MWh for Q1-14 and lower demand levels was the main driver of Front-Month which in turn helped the rest of the curve weaken.

Market close data has revealed that the 1-year forward price for both commercial gas & commercial electricity decreased - closing at 68.06ppt and £52.93/MWh, respectively. This can be seen in the graph below. 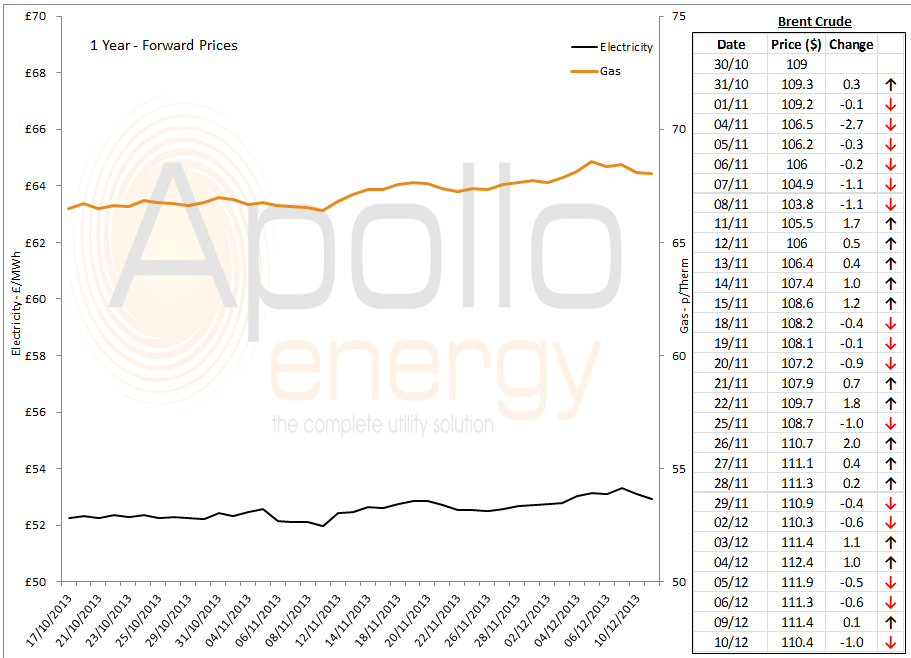 Brent 1st-nearby prices fell below $110/b yesterday after registering its biggest loss for 6 weeks. Libyan production is set to restart, the XL Keystone pipeline has now been commissioned and weak economic data from Germany were all factors which helped the contract fall. WTI displayed minor losses and the Brent/WTI spread has narrowed by around $7/b in the last fortnight, taking it to -$12/b.