Wind generation has improved over the weekend and solar production is also at high levels, renewable generation in general was much higher than anticipated on Friday. Spot prices have moved down as a result and near-curve prices are expected to make small losses today. In terms of gas, prices saw mixed movement on Friday as warmer temperatures and healthy supply helped some contracts turn bearish, however some contracts took an upward direction due to Norwegian supply concerns. Prices are expected to move down today following the return of the Karsto processing terminal which has improved Norwegian supply significantly. Today's prices can also be found in an easy to read table on our 'current UK energy price' page.

The two Front-Months for gas registered minor gains of around 0.20ppt and took influence from on-going supply concerns. Day-Ahead decreased in price on the back of warmer weather while seasonal contracts also moved down thanks to weaker Brent prices. Day-Ahead power began Friday's session with a £2/MWh loss but failed to decrease further, while the October-13 contract ended its cycle at £49.50/MWh. Nuclear availability improved as the Dungeness facility saw one of its power plants reconnected to the grid.

Gas prices opened today's session displaying a bearish trend as the system opened long and Brent prices fell further. Linepack is expected to reach 15mcm long on the back of BBL flows which have increased from 5mcm to 15mcm. The Holford storage facility is around 19% full after sending out 16mcm on Friday and the Karsto facility has returned online which withheld 55mcm while it was undergoing maintenance. Wind generation is expected to reach a peak of 4.5GW tomorrow which helped Day-Ahead power fall to £47/MWh. The improvement in renewable generation is to be offset by an increase in peak demand which is expected to rise to around 43GW tomorrow. Meanwhile the new Front-Month, November-13 decreased alongside coal prices.

Market close data has revealed that the 1-year forward price for commercial gas made a loss while commercial electricity went up - closing at 66.28ppt and £52.23/MWh, respectively. This can be seen in the graph below. 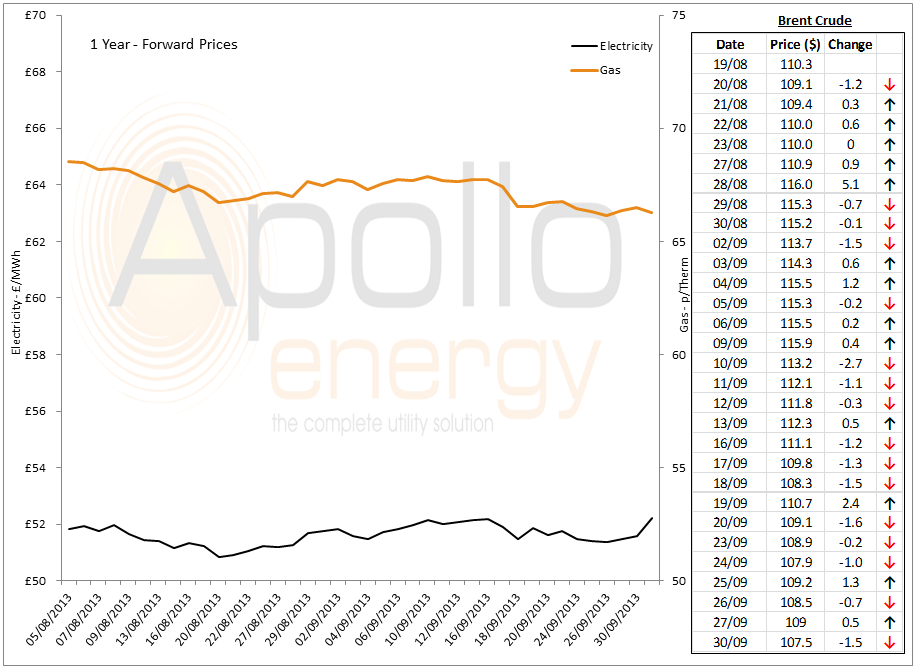 Brent prices closed Friday's session at $108.63/b and lost $0.58/b over the course of last week and made further losses this morning, dropping to around $107.7/b. WTI registered more prominent losses and fell by $1.8/b which took the Brent/WTI spread to -$6/b.