Spot prices have climbed higher over the weekend due to a drop in temperatures and a decline in wind generation. This downward tension should continue as temperatures and wind generation levels should remain low until Wednesday at least. Gas prices fell on Friday despite increased demand over the weekend and an under-supplied system throughout the session. UK LDZ demand is 19mcm higher today and is now just 1.1% below the seasonal average, a further increase in demand is also expected tomorrow. Below average temperatures are also expected but this should be offset by improved output via the UK interconnector. Today's prices can also be found in an easy to read table on our 'current UK energy price' page.

Gas contracts were largely unchanged on Friday as the system was just 6mcm short thanks to stronger flows from the Bacton BBL and Langeled. Other contracts on the near-curve were slightly bullish due to a milder weather forecast for the end of January and early February. Day-Ahead power decreased by £1.75/MWh by the end of Friday's session due to higher demand. Other near-curve contracts displayed losses with Front-Month shedding £0.30/MWh from its price, taking direction from weaker Brent. Further along the curve most contracts ended the day unchanged.

The gas curve opened with a series of price-drops this morning with the losses more prominent on the near-curve. Day-Ahead fell by 0.70ppt while Front-Month opened 0.75ppt lower. The Rough storage facility is still in withdrawal mode and is currently flowing at 42mcm, while mild weather has also been forecast for the end of the month. On the power curve Day-Ahead opened at a £2.25/MWh premium as wind production is still limited and isn't expected to improve until Wednesday; this improvement is also expected to be temporary. Further along the curve losses as high as £0.50/MWh were observed while Summer-14 fell by £0.15/MWh.

Market close data has revealed that the 1-year forward price for both commercial gas & commercial electricity decreased- closing at 66.36ppt and £52.33/MWh, respectively. This can be seen in the graph below. 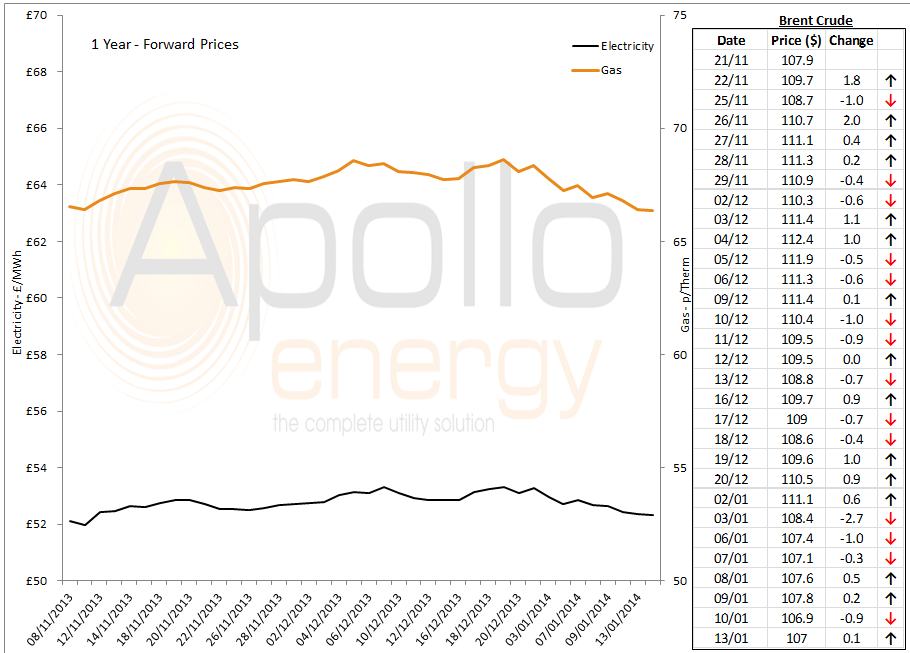