Spot power prices remained relatively low yesterday as ample supply levels and lower demand helped push prices down slightly. However, prices are expected to climb higher today as the UK has been hit by one of its coldest days this year, resulting in a higher demand forecast. Gas prices were bearish due to an oversupplied UK gas system, although a higher demand forecast for today helped to restrict any losses. UK LDZ demand is 12mcm higher this morning and the supply picture is much weaker with no imports via the interconnector and BBL flows falling by 25mcm.   Although prices should move higher the gains could be offset by weaker oil prices. Today's prices can also be found in an easy to read table on our 'current UK energy price' page.

Day-Ahead gas rose by 0.65ppt yesterday to end the session at 61.15ppt, this was despite a mild weather forecast and healthy flows; Linepack fluctuated slightly but was long for most of the day. Stronger Brent prices were one of the main influences on yesterday's market. The power curve displayed mixed movement as most contracts opened higher but gradually fell throughout the session. Q2-14 was one of a few contracts to close at a discount while Day-Ahead registered a gain despite a strong wind generation forecast for today.

Gas prices strengthened this morning as Linepack opened 8mcm short and flows from the Netherlands and St Fergus were reduced. Temperatures are expected to revert back to the seasonal average after a cold few days while an LNG delivery is expected later this month which helped to limit the gains. Power contracts followed their gas counterpart as prices across the curve moved higher. Day-Ahead climbed £0.80/MWh higher despite an improved wind production forecast although some downward pressure was provided by weaker Brent.

Market close data has revealed that the 1-year forward price for commercial gas decreased while commercial electricity moved higher- closing at 64.25ppt and £50.93/MWh, respectively. This can be seen in the graph below. 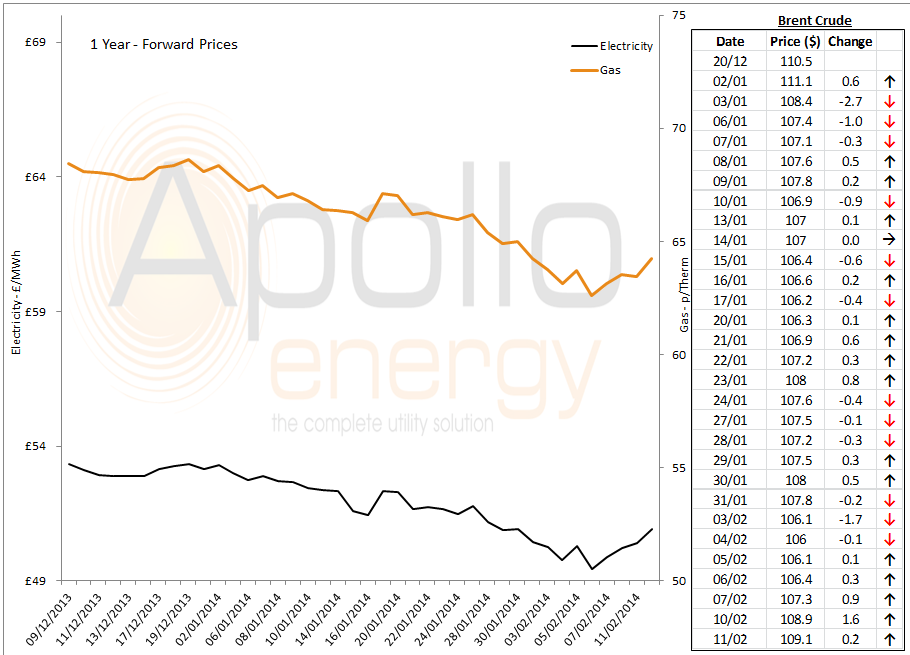 Brent 1st-nearby prices decreased yesterday following a series of gains over the weekend. Front-Month fell by almost $1/b to around $108.6/b but prices have rebounded this morning to above $109/b.