Near curve prices are expected to remain steady, with far-curve prices inching upwards. High solar generation is one of the factors behind a slight decrease in prompt prices. It was expected that after the weekend, temperatures would return to the yearly average, this forecast has now been revised as forecasters predicted a milder than usual March.

This may have a bearish impact on prices. Spot and near curve gas prices weakened yesterday, despite a strong start.   This was as a result of lower demand and a little more optimism regarding any interruption of Russian flows into Western Europe. There has been a slight drop in temperature today so this could push European gas demand slightly higher. In the UK, Local Distribution Zones demand is estimated to be above yesterday's levels. But, this is not enough to push prices up, and the market is still expected to weaken.

NBP prices decreased by the time the markets closed, with a number of contracts shedding at least 1ppt.   Langeled flows increased by 10mcm to 67mcm, ensuring an abundant supply at a time when demand remains low.   The current climate is higher than normal, and this was the main driver of losses across the gas curve. The power curve mirrored the movement of the gas curve with significant losses for the majority of contracts. The Day-Ahead power contract gained £0.25/MWh as a result of lower nuclear availability, caused by the later than scheduled restart of a plant.

The prompt and near curve gas prices lifted, whilst other contracts registered losses, as the Front-Quarter decreased by 0.15ppt whilst Front Month firmed by 0.05ppt. Flows changed very little, and the market remains balanced. Power prices saw a slight increase as the Day-Ahead contract opened £0.45/MWh higher and quarterly contracts saw losses. Coal-fired power increased its contribution to the generation mix to just below 30%.   This made up for the drop in wind generation, which is expected to remain low for the remainder of the week.

Market close data has revealed that the 1-year forward price for both commercial gas & commercial electricity decreased slightly - closing at 62.59ppt and £50.20/MWh, respectively. This can be seen in the graph below. 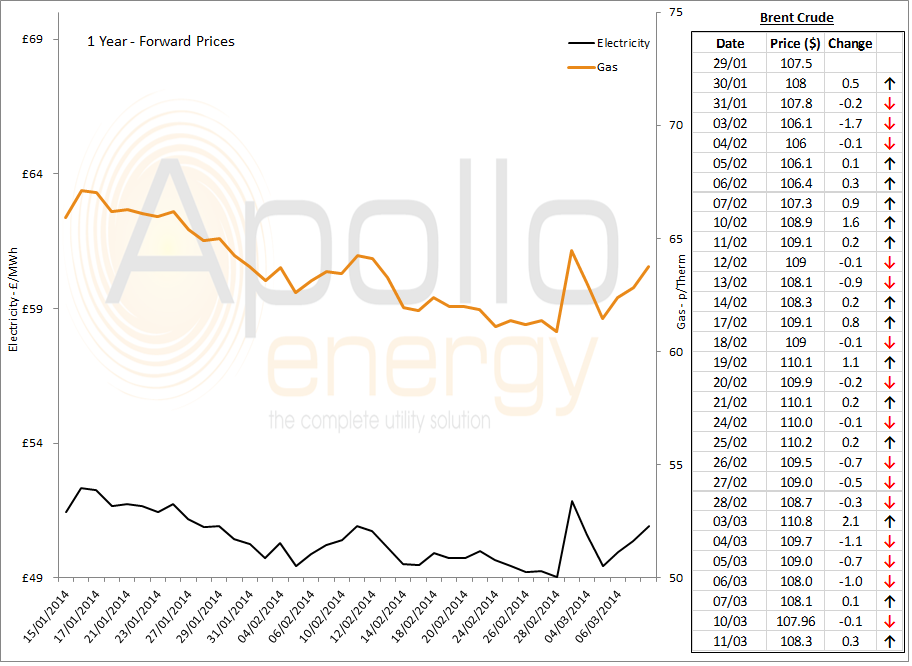 Both crude benchmarks dropped moderately yesterday (-92 cents/b for Brent, -$1.46/b for WTI), a key influence was the weak Chinese data released yesterday morning (fuelling uncertainties about the true state of China's economy) and markets are waiting for the latest developments in the Ukraine.