Spot power prices decreased yesterday after recording large gains earlier in the week, contracts took influence from strong renewable generation. Today prices are expected to remain stable as there is little change to fundamentals and the situation in Ukraine isn't expected to worsen. The gas market continued to climb higher yesterday due to the ongoing tensions in Ukraine which affected Russian flows coming into Europe. UK LDZ demand is similar to yesterday's levels although temperatures are expected to improve to above average levels until mid-April at least; prices are expected make small losses this afternoon as a result. Today's prices can also be found in an easy to read table on our 'current UK energy price' page.

Gas prices on the near-curve moved higher yesterday while contracts further out took a downward direction in the afternoon. Day-Ahead rose by 0.20ppt whereas Front-Month and Front-Season both shed 0.55ppt from their price. On the power curve prices followed a similar pattern to gas as Day-Ahead closed at a premium and May-14 softened by £0.50/MWh. Prices took influence from a number of factors which included; stronger gas prices, lower wind production and a reduction in coal and nuclear generation.

Gas prices took a bearish direction this morning except for Day-Ahead which opened 0.05ppt higher as Linepack began the session 20mcm short despite improved Langeled flows. Storage levels are around 55% full while flows via South Hook are healthy with two LNG deliveries scheduled this month. Day-Ahead power fell this morning on the back of the usual drop in demand on Friday's which offset a fall in wind generation. Power prices displayed similar movement to gas as the majority of contracts weakened, although bullish Brent offered some support to the far-curve.

Market close data has revealed that the 1-year forward price for both commercial gas & commercial electricity decreased - closing at 59.40ppt and £50.18/MWh, respectively. This can be seen in the graph below. 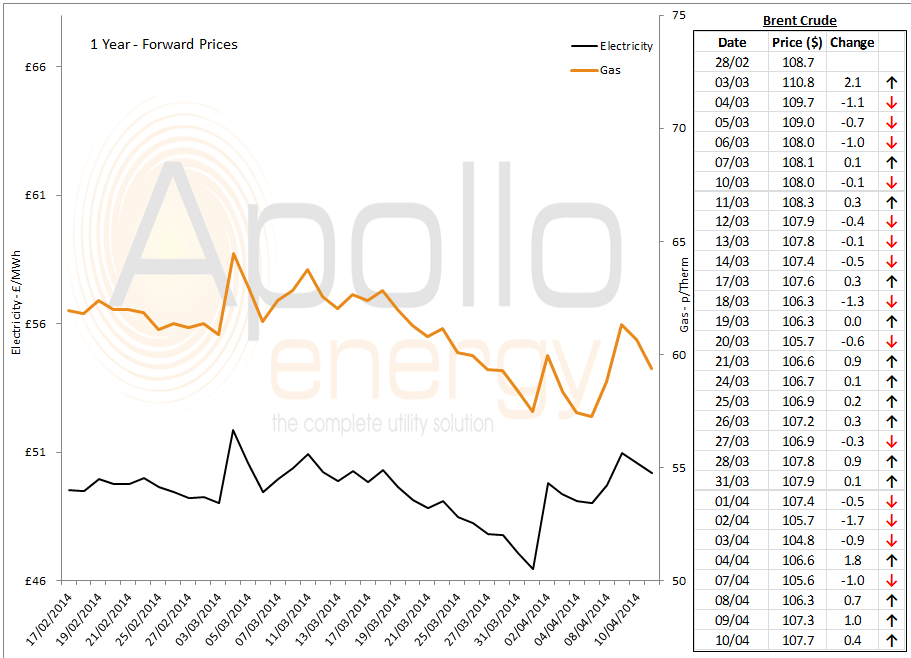 Brent 1st-nearby prices have climbed to around $107.6/b this morning as oil prices remain rather high due to various supply issues. WTI also increased to $103.3/b which has taken the Brent/ WTI spread to -$4.2/b.