Spot power prices decreased yesterday on the back of warmer temperatures in Europe which led to a drop in demand. However prices are expected to climb slightly higher today as the carbon market is predicted to strengthen this afternoon. Gas prices began yesterday's session with a series of losses but moved higher later in the day. Today UK LDZ demand is 1mcm higher and is currently 18.4% below the seasonal average. However the ongoing supply concerns in Ukraine should push prices higher today as the situation isn't expected to improve. Today's prices can also be found in an easy to read table on our 'current UK energy price' page.

Gas prices recorded gains yesterday with the price increases ranging from 0.15ppt for Day-Ahead to 0.95ppt for Summer-16. Linepack was short at the start of the session but gained length by the end of trading, limiting the upward movement of the Day-Ahead contract. The power curve displayed mixed movement on Thursday with Day-Ahead rising by £0.35/MWh and Front-Month adding £0.30/MWh to its price, while contracts on the far-curve closed at a discount. Day-Ahead was influenced by a weaker wind generation forecast for today.

Gas contracts displayed numerous gains this morning as the system opened 18mcm short following a drop in Langeled and BBL flows. Day-Ahead was the biggest mover and opened at a 0.90ppt premium while seasonal contracts also strengthened as Winter-14 climbed 0.50ppt higher. UK storage facilities are currently in injection mode as storage levels stand at around 55%. Day-Ahead power was the only contract to move down as it ignored the usual rise in demand on Mondays and opened up at £41.70/MWh. The rest of the curve followed a bullish trend and took direction from gas with Front-Month increasing by £0.55/MWh and Front-Season rising by £0.30/MWh.

Market close data has revealed that the 1-year forward price for both commercial gas & commercial electricity decreased - closing at 60.45ppt and £50.80/MWh, respectively. This can be seen in the graph below. 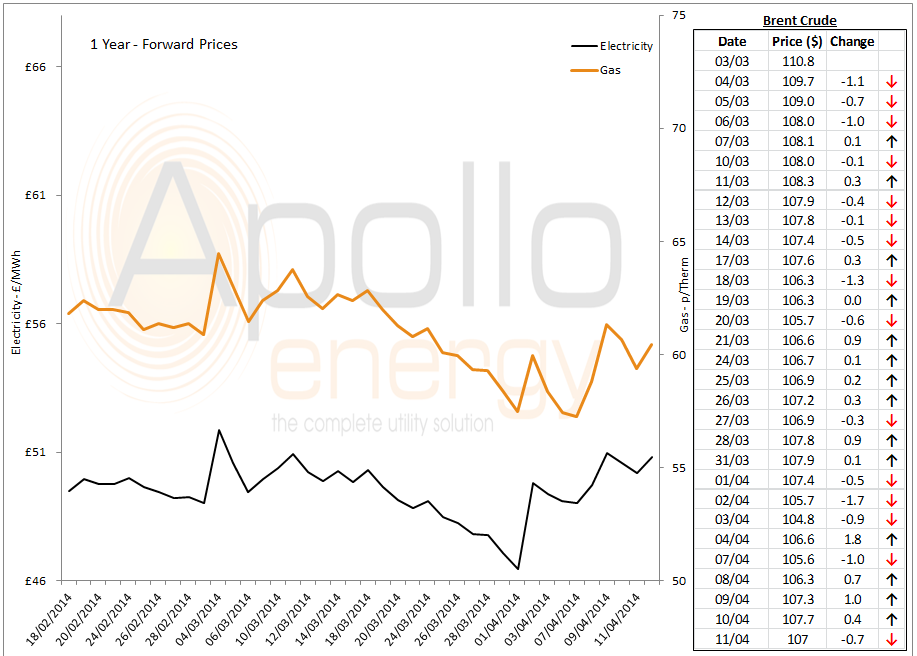 Brent 1st-nearby prices inched higher yesterday and have opened up at just over $107/b as supply issues are on-going. Meanwhile, WTI fell by $0.52/b which has taken the Brent/ WTI spread to -$5/b.