Spot prices made a small gain yesterday as wind generation is forecast to be lower today and consumption could rise slightly. There were numerous outages in France and one of the reactors is only expected to return in September. In Germany wind output is relatively weak while solar and thermal generation are at healthy levels.

Day-Ahead held relatively firm yesterday as the interconnector remains in export mode after running at full capacity over the weekend as it is expected to go offline tomorrow. Temperatures have seen a drop in some parts of the UK and Europe and demand was at 240mcm. Seasonal contracts shed from their price with Winter-14 displaying the largest drop of 0.75ppt. Seasonal contracts made losses as a result of weaker APi2 prices and Winter-13 was at £53.65/MWh, its lowest price since the start of May. Day-Ahead saw mixed movement throughout the session due to a nuclear reactor in Hinckley coming back online while two coal-fired plants suffered outages.

Gas contracts were influenced by an increase in storage withdrawals and BBL flows and displayed losses across the curve. Day-Ahead fell by 2.00ppt and Winter-15 shed 0.95ppt, the rest of the curve saw small losses ranging from 0.05ppt and 0.10ppt. Bearish prompt gas contracts and Brent prices led to Day-Ahead power dropping by £1.35/MWh to open up at £45.00/MWh. The rest of the power curve saw small losses similar to gas contracts and ranged between £0.10/MWh and £0.20/MWh. August-13 and September-13 saw no change while Summer-15 made a £0.60/MWh discount.

Market close data has revealed that the 1-year forward price for commercial gas went up while commercial electricity fell slightly - closing at 67.00ppt and £50.95/MWh, respectively. This can be seen in the graph below. 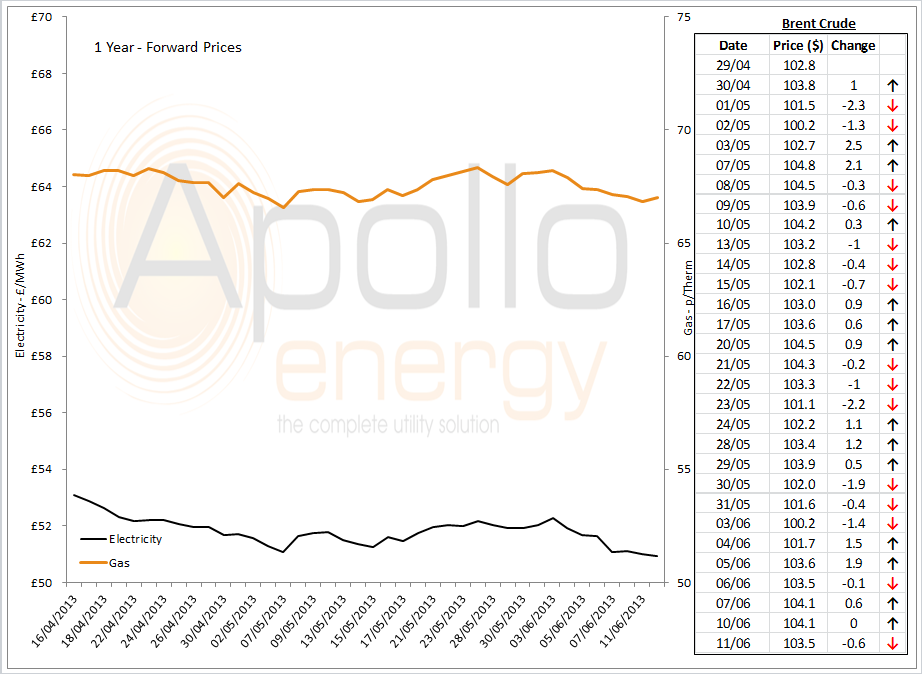 Brent 1st nearby prices experienced a small drop yesterday despite the recent reports displaying weak Chinese oil data. The Buzzard field is now fully functional once again and is running at 200kb/d and South Sudan is still exporting oil despite the current tensions.