Spot power prices displayed little movement on Monday as stable renewable production and lower consumption offset the effects of stronger fuel contracts. Today's outlook is generally bullish with stronger gas the main market driver. Gas prices increased yesterday as the system fell short following a surge in storage injections. The upward trend has continued this morning as the system remains under-supplied as storage injections remain strong and Norwegian supply has decreased. Today's prices can also be found in an easy to read table on our 'current UK energy price' page.

Gas prices climbed higher in the afternoon as storage injections rose from 19mcm to 38mcm leaving the UK gas system 4mcm short by the end of the session. The near-curve ignored stronger Norwegian supply which increased following the return of the Troll gas field. Further out, a rebound in oil prices supported some contracts which displayed similar levels to Friday. Power contracts were generally stable on Monday, with rising gas failing to influence near-curve contracts. Day-Ahead showed little change as improved solar generation was offset by a fall in wind production. Meanwhile, stronger Brent and coal resulted in some gains on the far-curve.

The gas curve has displayed gains across the curve this morning with direction coming from an undersupplied gas system and rising oil prices. Langeled flows have fallen from 50mcm to 35mcm this morning and the system is 8mcm short as a result. Power contracts have followed their gas counterparts this morning and the majority have displayed an increase, with far-curve contracts also supported by strengthening oil. Solar generation has decreased slightly this morning as most of the UK is overcast, while wind levels remain low; resulting in a small increase on the prompt.

Market close data has revealed that the 1-year forward price for both commercial gas & commercial electricity increased - closing at 43.08ppt and £43.08/MWh, respectively. This can be seen in the graph below. 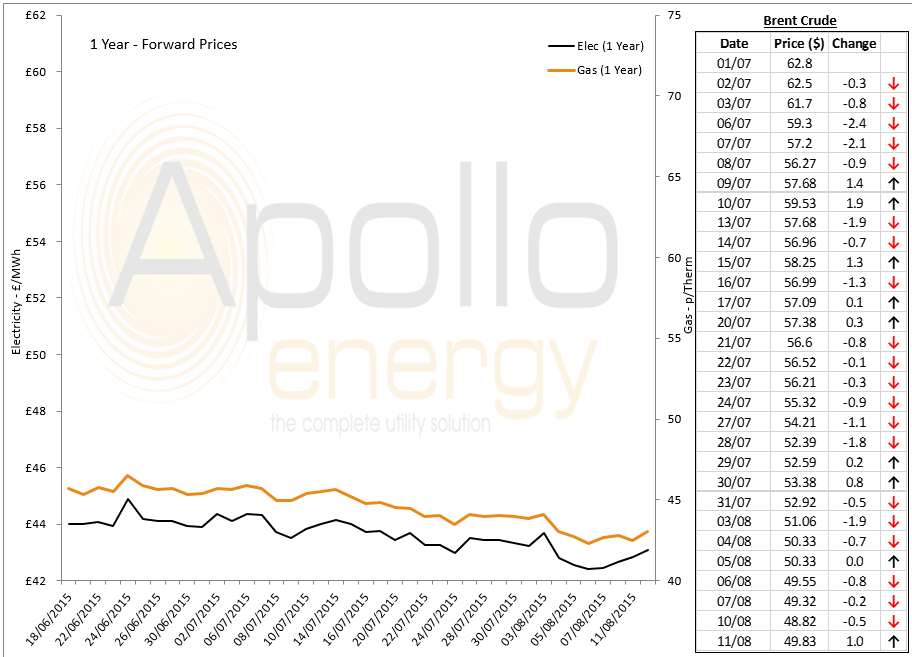 Brent 1st-nearby prices rose by around $1/b compared to yesterday morning on the back of strong Chinese production data, however, prices remain below $50/b.