Nuclear availability fell slightly due to a worker's strike in France while lignite production was slightly higher and wind generation is expected to improve next week. Several outages also occurred at nuclear units which will limit availability for the next two days which added to unstable supply levels. In terms of gas, total Norwegian gas flows are lower this morning and despite the October-13 contract appearing overbought, prices could move higher. Today's prices can also be found in an easy to read table on our 'current UK energy price' page.

Gas contracts made a series of losses in yesterday's session with price drops as high as 0.60ppt, however Day-Ahead only fell by 0.05ppt as the system was short for most of the day. Seasonal contracts also decreased due to weaker Brent prices which fell to $111.50/bbl by the end of the session. On the power curve every contract except Day-Ahead closed at a discount with Novermber-13 falling by £0.45/MWh. Wind generation is expected to drop by 2GW over the course of today which resulted in Day-Ahead adding to its price.

Gas prices moved up this morning with Day-Ahead opening 0.55ppt higher and October-13 increasing by 0.35ppt. Linepack opened the session 13mcm long although improved flows via Holford and Langeled failed to balance the system. An LNG shipment is expected to arrive next week with the potential of further deliveries as the month goes on. Day-Ahead power reached a three month high of £50.90/MWh despite wind generation improving and holding a 10% share of the generation mix. Maintenance is on-going at two nuclear reactors which are expected to run at low capacity for the rest of the week although they should return earlier than anticipated.

Market close data has revealed that the 1-year forward price for commercial gas made small loss while commercial electricity went up - closing at 67.65ppt and £52.08/MWh, respectively. This can be seen in the graph below. 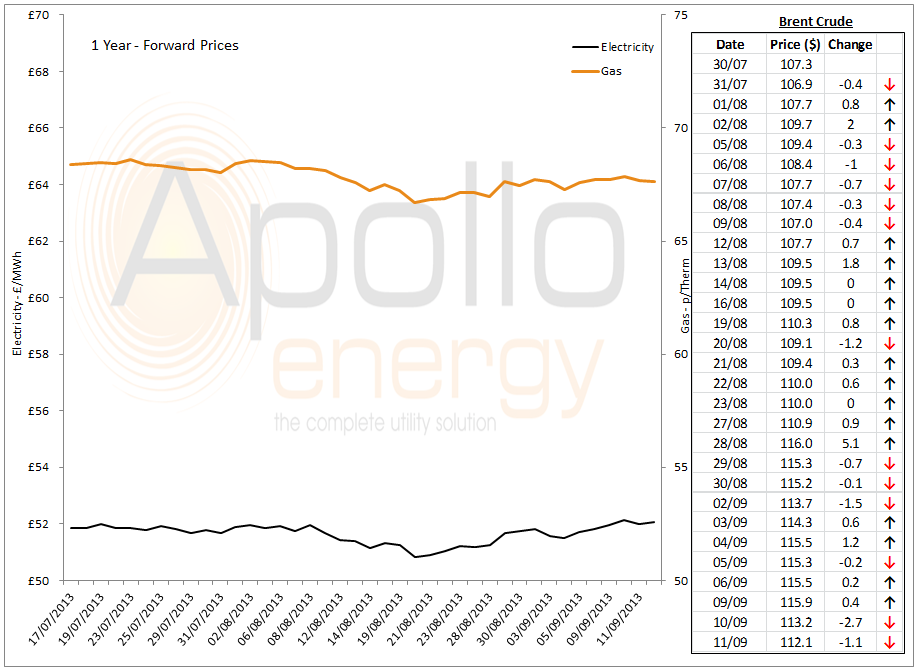 Brent 1st-nearby prices fell by $2.47/b for the second day running and stood at $111.46/b as of this morning. Brent has fallen by around $5 in the last 48 hours on the back of the Syrian agreement to hand over any chemical weapons to Russia.