Demand levels are expected to drop over the weekend as temperatures are forecast to improve slightly but a weaker supply outlook should offset any losses. A number of nuclear outages have also taken place so spot prices are likely to display a stable outlook in the coming days. Gas supply levels in the UK are rather healthy at present and an improvement in temperatures helped push prices down yesterday.   UK demand is estimated to be 8mcm lower today and supply levels remain strong so November-13 prices are expected to decrease as a result. Today's prices can also be found in an easy to read table on our 'current UK energy price' page.

Stronger Brent prices helped push gas contracts higher throughout the day yesterday as the US shutdown continues to affect the market. South Hook flows rose to 26mcm in the morning but later fell to 17mcm by the end of the session which also supported contracts. Day-Ahead power made a gain of £0.25/MWh yesterday and took influence from its gas counterpart. The rest of the near-curve displayed little change with December-13 and January-14 showing no movement whatsoever. Far-curve prices fell slightly despite an increase in Front-month Brent and APi2 coal.

The UK gas system opened 8mcm long as flows via the Langeled pipeline were around 60mcm and made up for a drop in LNG send-outs from Milford Haven. Front-Month contracts failed to take direction from stronger Front-Month Brent and the curve opened with a bearish sentiment. Power contracts displayed minimal movement except for Day-Ahead with most contracts deviating by around £0.10/MWh. Day-Ahead added £1.85/MWh to its price on the back of the usual increase in demand on Mondays and a below average wind production forecast. Nuclear generation in France fell slightly which was possibly the main cause for French interconnector exports halving.

Market close data has revealed that the 1-year forward price for both commercial gas & commercial electricity registered a loss - closing at 66.56ppt and £52.10/MWh, respectively. This can be seen in the graph below. 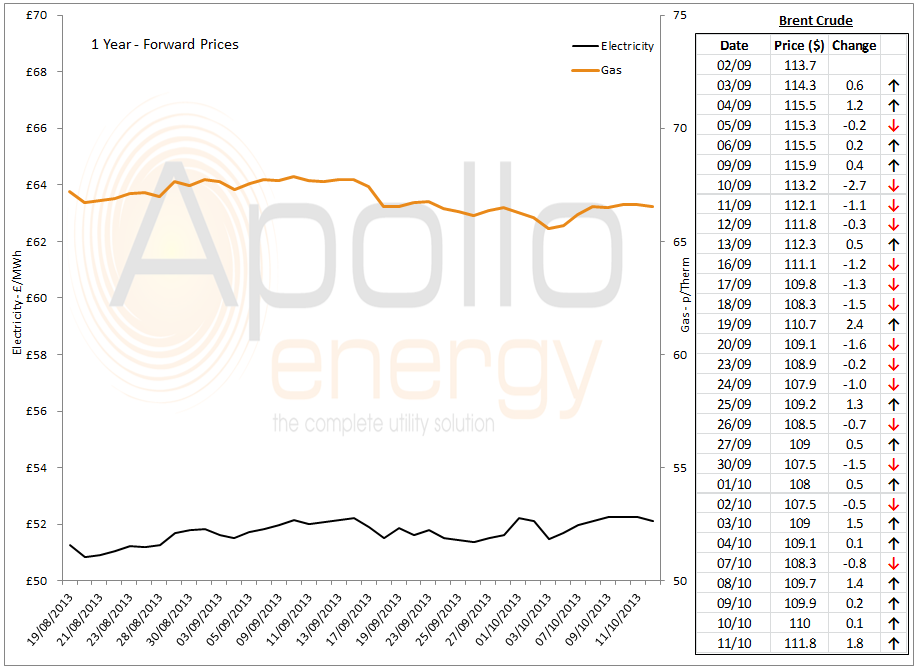 Brent prices climbed $2.74/b higher yesterday to peak above $111/b by the session's close, Brent's highest closing price for one month. Middle Eastern tensions are thought to have played a part as a number of incidents have occurred in Egypt, Libya and Syria.