Spot power prices held firm yesterday as strengthening oil was offset by a weaker carbon outlook. Prices are expected to decrease today due to an average weather forecast for the rest of the week and a strong wind production outlook. Weaker fundamentals and fresh tensions in Ukraine led to a bullish gas market yesterday and numerous gains were observed. Linepack began today's session close to balance despite a decrease in European gas flows, however, stable fundamentals should lead to small price-drops. Today's prices can also be found in an easy to read table on our 'current UK energy price' page.

Gas prices inched higher on Monday with some contracts increasing by as much as 0.20ppt. A short UK gas system was the main driver of prices as a number of outages at pipelines resulted in short supply; the system fell 25mcm short during the afternoon. Day-Ahead power showed little movement yesterday, falling by just 0.10/MWh by the end of the session, with improved wind production restricting the effects of stronger gas and fuel. Further along the curve most contracts moved higher following a rebound in Brent prices.

Day-Ahead gas was unchanged this morning and continues to trade at 54ppt on the back of a balanced UK gas system and temperatures around the seasonal norm expected for the next few days. Further along the curve most contacts decreased by as much as 0.60ppt. In terms of supply, gas flows were slightly down on yesterday's figures following a reduction in St Fergus output. On the power curve Day-Ahead fell by £1/MWh and ignored the stability of its gas counterpart as strong wind generation levels are expected for the rest of the week. The majority of power contracts opened at a discount although there were a few bullish exceptions.

Market close data has revealed that the 1-year forward price for both commercial gas & commercial electricity decreased - closing at 55.78ppt and £50.40/MWh, respectively. This can be seen in the graph below. 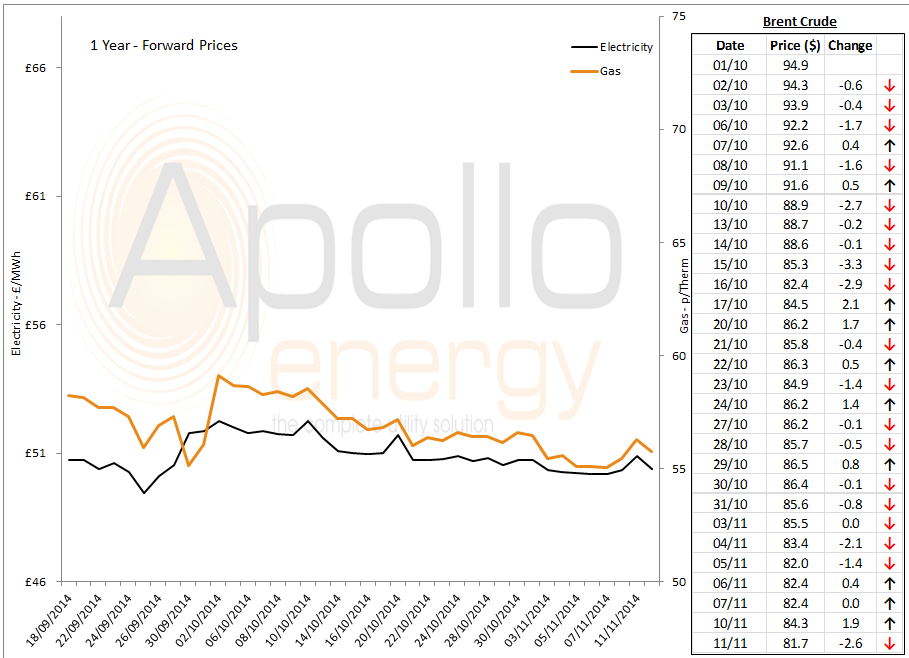 Brent-1st nearby prices fell by $1.84/b this morning following a rare rebound yesterday; Brent currently trades at $81.72/b.