Spot prices climbed higher yesterday due to strong demand levels, while wind generation fell and clean gas costs rose. However prices could turn bearish in the next few days as temperatures are expected to be above average for this time of year and wind generation should improve over the weekend. Gas prices fell on the back of lower demand despite reduced flows from Norway which resulted in additional storage withdrawals. Langeled flows are close to maximum but BBL flows have fallen slightly and temperatures in Europe were below average this morning. Higher storage withdrawals were required to balance the system which could help gas prices rise but any gains should be limited by a lower demand forecast. Today's prices can also be found in an easy to read table on our 'current UK energy price' page.

Gas contracts decreased by the end of yesterday's session as temperatures are expected to be above average which will ultimately lead to lower demand. Long term forecasts suggest Q1-14 temperatures will be average to above average which has also helped prompt contracts fall. Further along the curve weaker Brent added downward pressure to seasonal contracts. On the power curve most contracts took direction from gas and moved down except Day-Ahead which added £0.90/MWh to its price as wind generation was forecast to fall today and demand should grow. The rest of the curve was generally bearish with Summer-16 registering a £0.05/MWh price-drop and February-14 closing the session £0.35/MWh lower.

Gas prices made small gains at the start of today's session as demand levels increased by 25mcm due to colder than expected temperatures this morning. Flows were slightly improved but Linepack was 54mcm short with the Rough facility withdrawing at a rate of 29mcm, its highest flow rate since March this year. Day-Ahead power fell by £0.50/MWh despite the rest of the curve taking an upward direction; wind generation is expected to remain at its current levels for the rest of the week which was the main factor for the loss. The rest of the curve tracked its gas counterpart and made gains.

Market close data has revealed that the 1-year forward price for both commercial gas & commercial electricity decreased - closing at 67.94ppt and £52.88/MWh, respectively. This can be seen in the graph below. 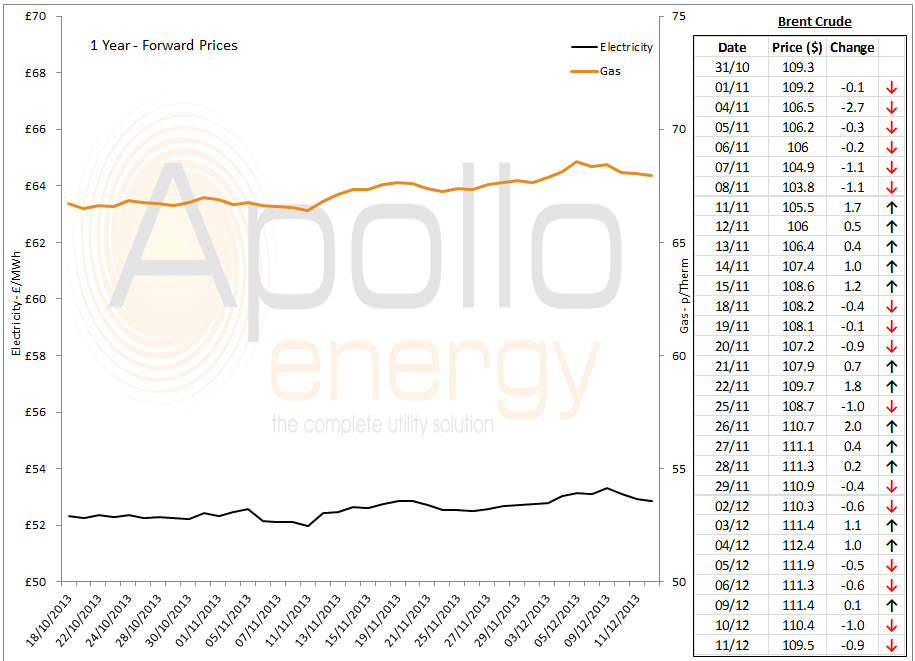 Brent 1st-nearby prices made significant gains at the start of the session yesterday but fell throughout the day to close with practically no change; currently trading between $109/b and $110/b. WTI climbed $1.71/b higher which has taken the Brent/ WTI spread to -$11/b.