Spot power prices continued to take influence from the milder weather and stronger wind forecast and recorded further losses yesterday; prices are expected to hold firm today as there is little change to fundamentals. Gas prices were relatively stable yesterday despite reduced BBL output and a drop in Norwegian imports, resulting in an undersupplied system. Today UK LDZ demand rose by 4mcm although the launch of the new Troll compressor facility in Norway could see Norwegian flows rise by 20mcm which has offered bearish support. Today's prices can also be found in an easy to read table on our 'current UK energy price' page.

The UK gas system was long throughout yesterday's session as withdrawals from the Rough storage facility increased up to 39mcm. Day-Ahead power fell by 0.45ppt and Front-Month decreased by 0.60ppt, while April-14 registered the largest loss of the day and closed at a 0.75ppt discount. The far-curve suffered only minor losses as Brent ended the session largely unchanged. Day-Ahead gas shed £0.50/MWh from its price as wind generation was forecast to rise today. The contract moved down despite two outages at coal-fired plants and small losses were also observed further along the curve; these price-drops ranged between £0.05/MWh for Winter-15 and £0.20/MWh for Summer-14.

The gas curve displayed numerous gains this morning following a rise in demand; Day-Ahead opened 0.50ppt higher despite an improved supply picture. The UK gas system opened 8mcm long as LNG flows increased and storage withdrawals are still being made. On the far curve the gains were less prominent as no support was offered by Brent which moved just £0.05/bbl. The power curve saw varied movement this morning as most contracts opened at a premium while some, including Day-Ahead recorded price-drops of up to £0.30/MWh. Wind generation is expected to rise tomorrow with a peak forecast of 6GW; Wind currently holds an 11% share of the generation mix.

Market close data has revealed that the 1-year forward price for both commercial gas & commercial electricity moved higher- closing at 64.11ppt and £50.75/MWh, respectively. This can be seen in the graph below. 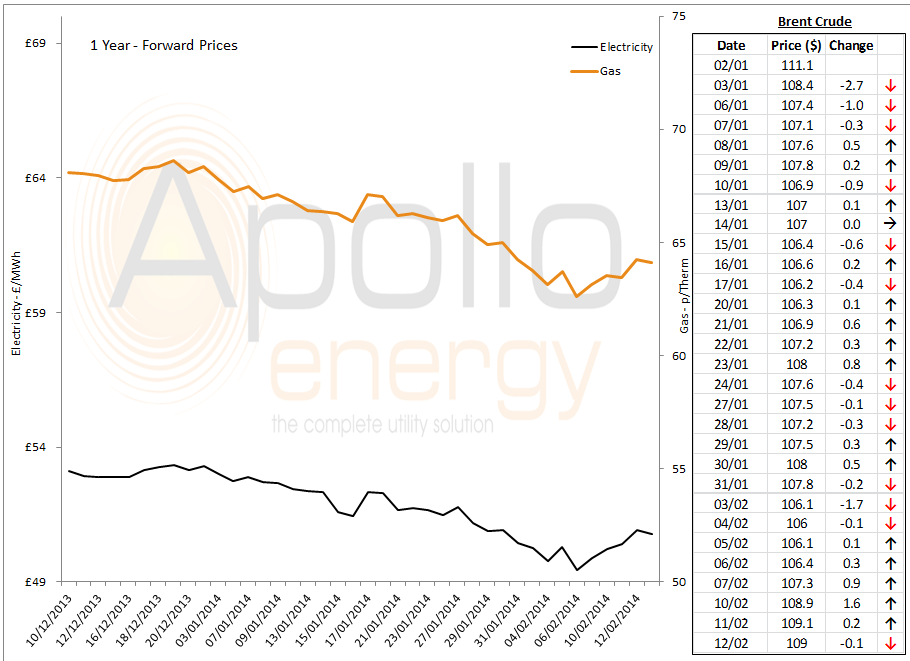 Brent 1st-nearby prices hovered between $108.6/b - $108.7/b yesterday but ended the session flat. Meanwhile, WTI climbed higher last night and the Brent/ WTI spread now stands at -$8/b.