Spot power prices received support from stronger gas yesterday but milder temperatures and a positive end to talks regarding Ukraine has helped to weigh on prices this morning; further losses could be recorded this afternoon. Gas prices strengthened yesterday on the back of supply concerns, following the Dutch announcement of production cuts at the Groningen gas field. News of a ceasefire between Russia and Ukraine supported the bears this morning and this has helped prices correct downwards. Today's prices can also be found in an easy to read table on our 'current UK energy price' page.

Gas prices continued on a bullish trend on Wednesday due to Dutch production cuts which have resulted in supply concerns across Europe. Upward movement was observed across the curve and weaker demand levels in the UK were largely ignored. Power prices were pushed higher by gas as March-15 reached its highest trading price this year, so far. Day-Ahead was the exception to the gains as milder weather helped the contract shed from its price, assisted by a stronger wind generation forecast.

The system was just 3mcm short this morning as demand levels are lower this week, helping most contracts to open at a discount. Day-Ahead gas moved down as a result of the improved temperatures currently being experienced in the UK, as well as the usual drop in demand on Fridays. Wind generation is set to rise to around 4GW tomorrow and this has helped Day-Ahead power to decrease, with Friday's drop in demand influencing the contract further. Movement on the near-curve was generally bearish but stronger coal and carbon contracts helped some far-curve contracts to move higher.

Market close data has revealed that the 1-year forward price for commercial gas decreased while commercial electricity held its price - closing at 51.53ppt and £47.50/MWh, respectively. This can be seen in the graph below. 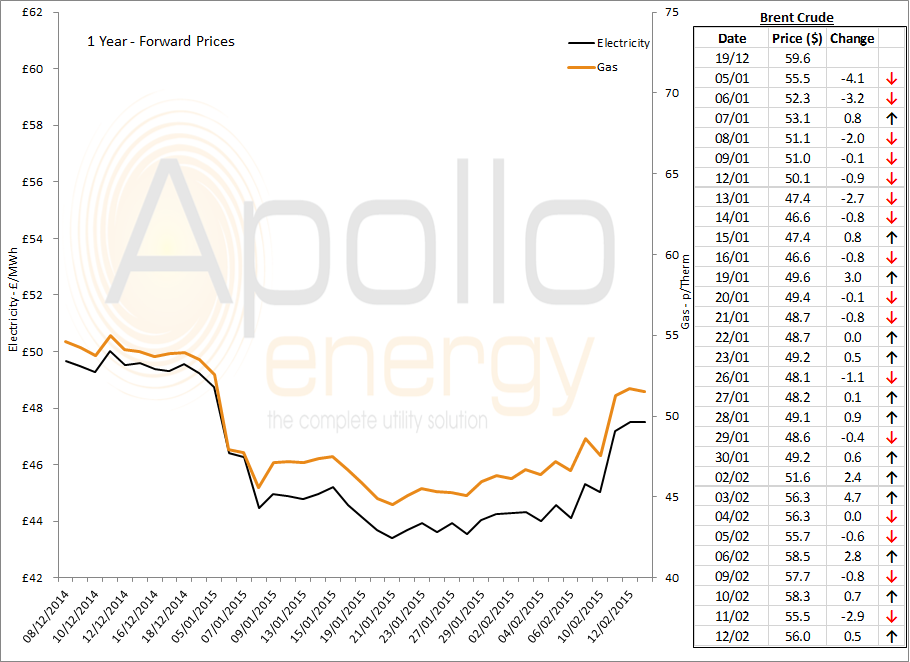 Brent 1st-nearby prices remain just under $56/b following a drop of $1.7/b yesterday, however, today's outlook is bullish and gains were recorded earlier in the session.