The continued strong solar generation in Germany, alongside the gradual return back to full nuclear capacity kept spot prices down yesterday. European temperatures are expected to remain warmer than expected for this time of year, again keeping spot prices down. With today marking the beginning of the UK's carbon permit cut, and Monday 17th March marking the EU member state volume reductions, limited gains across power prices are possible. Gas prices remained bearish yesterday, with NBP ICE April 2014 prices shedding 1.06% following unseasonably low demand and a reduction in Norwegian exports to the UK. The UK Local Distribution Zones demand remains down today, 9.6% below the seasonal average. The lack of insight into the Ukrainian crisis and uncertainties revolving around a potential cut in Russian supplies have seen spot and near curve prices remain low, with TTF Cal 2015 prices falling to a 3-year low yesterday. The market still has room to weaken in the following session despite hopes for increased demand towards the end of the week. Today's prices can also be found in an easy to read table on our 'current UK energy price' page

The gas market remained under bearish influence yesterday with prices reflecting the low demand. Day-Ahead contracts recorded the largest losses of 0.95ppt - prices across the remainder of the curve mirrored this loss with Front-Month and Front-Season closing at discounts of 0.80ppt and 0.70ppt respectively. The only gain on the power curve yesterday was Day-Ahead, closing at a £0.35/MWh premium due to weak wind generation. On the far curve, S-14 registered a £0.45/MWh loss whilst Q2-14 also succumbed to bearish pressure shedding £0.70/MWh.

Near curve NBP contracts opened reasonably flat today, with S-16 showing the largest adjustment, gaining 0.40ppt. Overall, prices continue to rectify gains made on the back of the Ukrainian crisis. Linepack opened short (-7mcm), but with Langeled flows returning to 60mcm overall gas flows are stronger today. 8mcm has been designated for injection whilst there are no withdrawals occurring. The power curve was broadly analogous with its gas counterpart today, opening relatively flat. Continued low wind generation helped Day-Ahead gain £0.40/MWh this morning, though further gains on the power curve were limited by the persistent mild temperature forecasts. Despite the imminent carbon permit cut, contracts on the far curve saw bullish pressure relax somewhat.

Market close data has revealed that the 1-year forward price for both commercial gas & commercial electricity decreased slightly - closing at 62.02ppt and £49.85/MWh, respectively. This can be seen in the graph below. 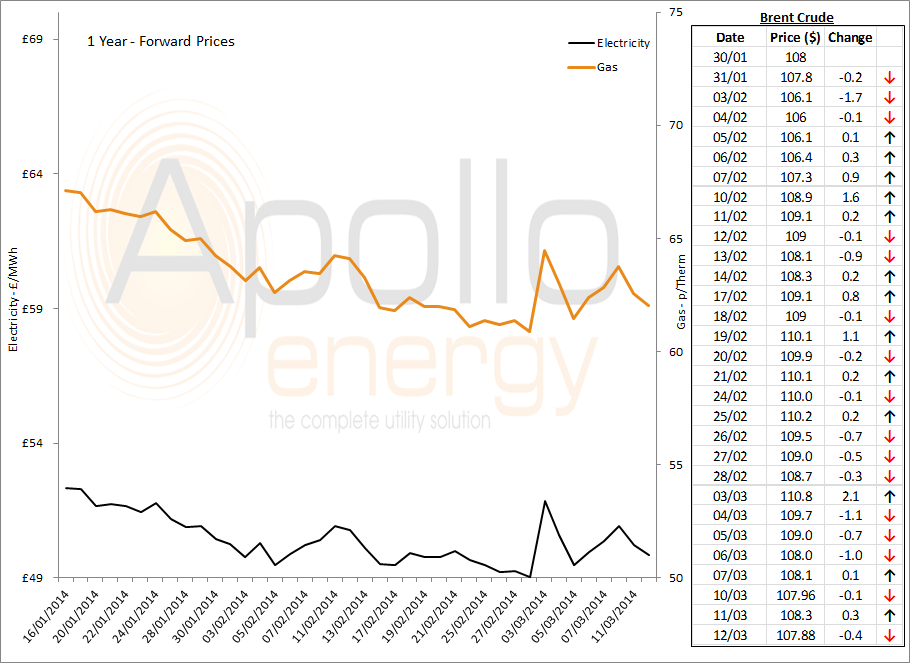 Despite Brent prices showing a minor gain yesterday on the back of the Ukrainian and Libyan situations though any bullish influence was eroded overnight following pessimism over the likelihood of a Chinese slowdown. WTI shed over $1/b yesterday whilst the Brent/WTI spread fell by -$1.6/b.