Spot prices moved higher on Friday as coal and carbon markets strengthened and renewable generation levels were low. The situation in Ukraine is also unclear and it is expected prices will record further gains this afternoon due to this uncertainty. Gas prices also rallied higher despite lower demand as supply concerns in Russia & Ukraine supported contracts. This bullish pressure looks set to continue today as limited gas flows from Eastern Europe are pushing prices higher across the board. Today's prices can also be found in an easy to read table on our 'current UK energy price' page.

Day-Ahead gas fell by 0.50ppt on Friday with a warmer weather forecast helping to weigh on the contract. However, most prompt contracts took an upward direction although Front-Month and May-14 ended the session unchanged. Further along the curve contracts softened with the losses ranging from 0.05ppt for Winter-15 to 0.30ppt for Summer-16. The power curve displayed mixed movement with Day-Ahead closing £0.05/MWh lower as a result of the healthy wind generation forecast for today, while Front-Month took direction from gas and rose by £0.15/MWh. Most contracts on the far-curve moved higher with Summer-16 adding £0.10/MWh to its price and Winter-14 rising by £0.35/MWh.

The UK gas system opened 40mcm long as Langeled flows reverted back to the levels seen throughout winter with output of around 60mcm. Above average temperatures are expected in the UK this week but this failed to restrict the bulls as tensions in Ukraine dictated the market. Front-Quarter and Front-Season both added 1.75ppt to their price while Day-Ahead recorded the smallest gain of 0.70ppt. Power prices also continued on an upward trend as Day-Ahead opened at a £2.00/MWh premium with wind generation levels expected to fall tomorrow. Today wind levels are relatively high which has offset the 10% drop in gas-fired generation.

Market close data has revealed that the 1-year forward price for both commercial gas & commercial electricity recorded strong gains - closing at 62.40ppt and £51.65/MWh, respectively. This can be seen in the graph below. 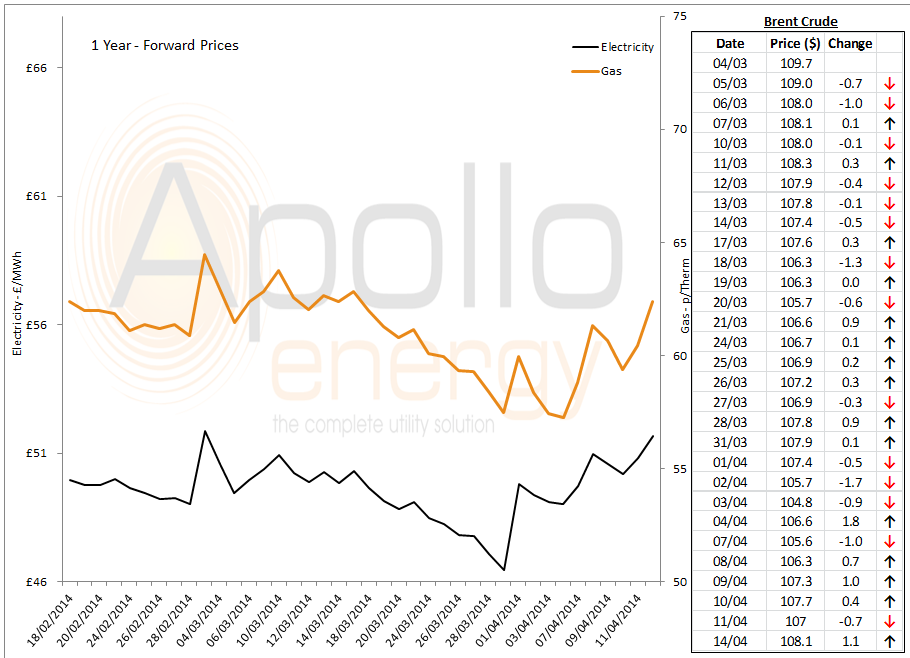 Brent 1st-nearby prices were generally stable on Friday but inched higher over the weekend due to the situation in Ukraine. Brent opened up at just over $108/b this morning while WTI stands at $104.3/b.