Spot power prices have displayed an increase as below average temperatures have been forecast in the UK for the coming days, while wind generation levels are also set to drop. National holidays in numerous EU countries will reduce demand levels but the outlook for this afternoon remains bullish. Gas prices moved higher yesterday afternoon due to a revised weather forecast which has predicted cooler temperatures for the rest of the week. Supply levels were also lower day-on-day and resulted in an undersupplied gas system. The system has opened long this morning despite a 10mcm increase in LDZ demand as exports to Belgium have been cut; prices are expected to stabilise this afternoon. Today's prices can also be found in an easy to read table on our 'current UK energy price' page.

Gas contracts added to their price on Monday as an expected drop in temperatures helped to support the curve. A short UK gas system also assisted the bulls, with higher exports and weaker LNG send-outs resulting in short supply. Power contracts also closed at a premium with influence coming from stronger gas, although Day-Ahead was the exception to the upward movement. The prompt recorded a loss on the back of a mild weather and stronger wind generation forecast for today. Meanwhile, prices were supported further along the curve by rising carbon costs and scheduled maintenance at UK coal facilities.

Gas prices continued to rise this morning as the expected uptick in demand provided support. However, the upward movement was subdued by a comfortable UK gas system as reduced exports and improved Norwegian flows resulted in healthy supply. An expected drop in wind generation over the coming days and a colder weather forecast have helped to significantly lift the prompt this morning. The expected drop in temperatures has helped to support contracts on the near-curve, displaying a similar trend to gas.

Market close data has revealed that the 1-year forward price for both commercial gas & commercial electricity increased slightly - closing at 47.45ppt and £45.28/MWh, respectively. This can be seen in the graph below. 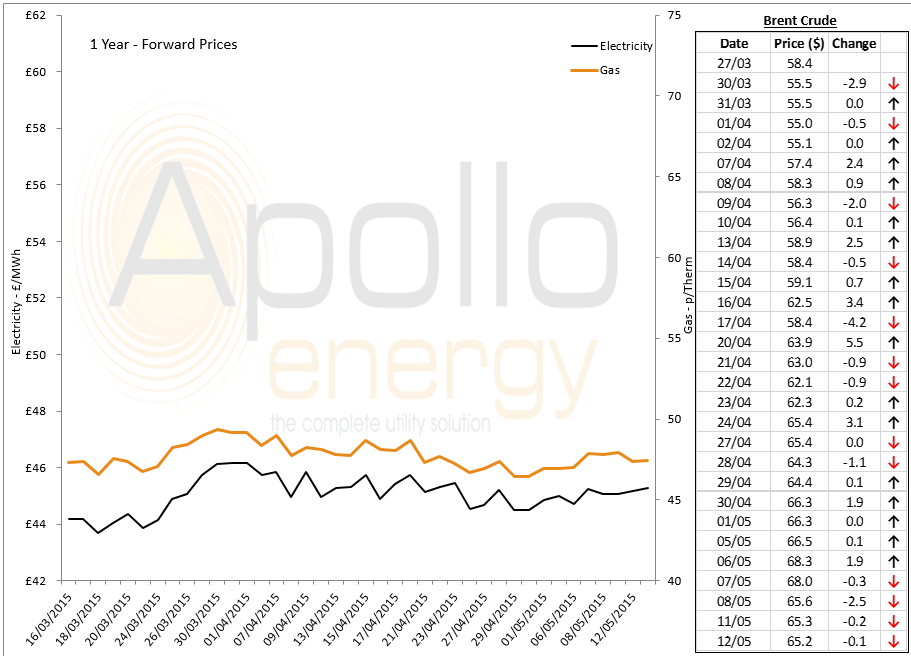 Brent 1st-nearby prices have recorded their third successive loss and remain below $65/b, as calmer geopolitical tensions and global oversupply have led to a bearish market.