Spot power prices saw an increase yesterday as a result of a lower wind production forecast while calendar-2014 prices were also supported by higher clean coal and gas costs. Norwegian gas output remains low due to reduced flows via the Langeled and BBL pipelines which should see October-2013 prices climb higher. Today's prices can also be found in an easy to read table on our 'current UK energy price' page.

The gas curve displayed bearish movement yesterday but the losses were restricted by a reduction in Norwegian flows, higher demand also helped limit the losses. Day-Ahead saw no change from its opening price and closed the session at 66.90ppt while the Aldbrough storage unit will go offline on Sunday as it undergoes 7 day maintenance. Power contracts took direction from gas and made a series of losses at the end of yesterday's session. The losses were slightly range bound by stronger Brent prices as well as the scheduled maintenance of a gas-fired plant and the postponed return date of a nuclear facility. Day-Ahead mirrored its gas counterpart and closed the session unchanged at £50.90/MWh.

Most gas contracts went up this morning as a result of the system opening 1mcm short and increased demand due to a drop in temperatures. Flows via the Langeled pipeline remain below 20mcm while the Bacton terminal is set to undergo maintenance which has also helped contracts turn bullish. Day-Ahead power moved down slightly thanks to the expected improvement in wind generation although most prompt contracts followed a similar trend to gas and climbed higher. Further along the curve prices were pushed higher by stronger spot EUAs while Brent and APi2 coal saw little change.

Market close data has revealed that the 1-year forward price for both commercial gas made & commercial electricity increased - closing at 67.75ppt and £52.15/MWh, respectively. This can be seen in the graph below. 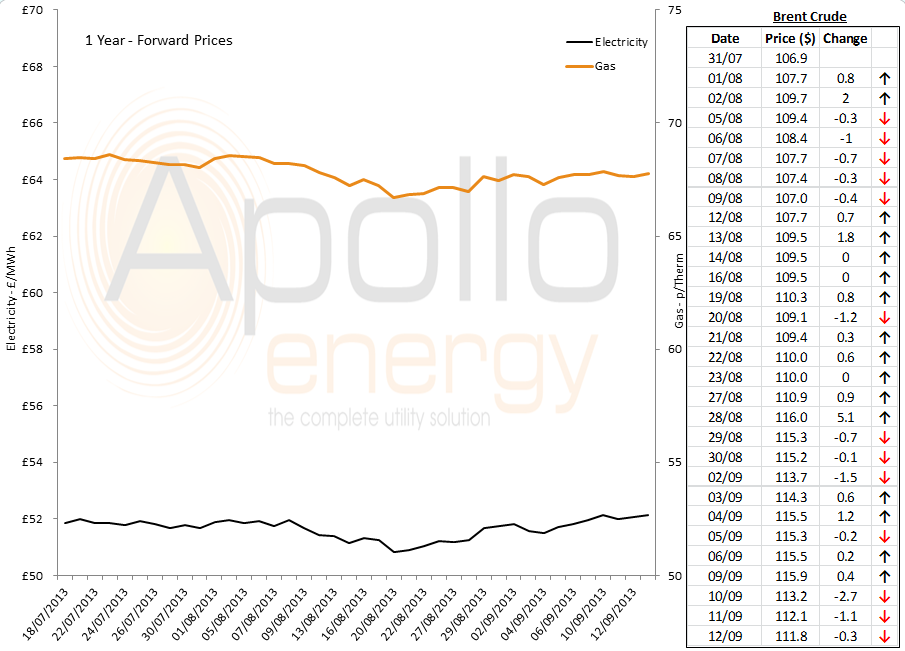 Brent 1st-nearby prices showed little movement yesterday and closed around 111.5/b after making considerable losses earlier in the week; the WTI/ Brent spread is currently just above -$4/b for the second day in a row. Meanwhile Syrian tensions have eased somewhat but it is still not clear what could happen in the near future in regards to a US intervention.