Spot power prices displayed mixed movement on Friday as an expected rise in renewable generation was offset by a drop in temperatures over the weekend. Prices have initially opened higher this morning but rising wind generation and average power consumption should result in a bearish outlook for the coming days.

The movement of European gas prices also varied on Friday as the weekend's colder weather and an undersupplied system offered support to the prompt, while improved Dutch production weighed on other contracts. The gas system remains undersupplied this morning due to a rise in demand, with strong LNG supply failing to offset the difference; prices have moved higher as a result.

Near-curve gas prices increased on Friday on the back of an undersupplied system, despite a drop in demand as flows via the Langeled pipeline were weak. Movement further along the curve was generally subdued as falling Brent restricted the bulls.

The majority of power prices decreased on Friday as generation levels were comfortable and coal recorded a loss in the afternoon. Weaker oil prices also helped to weigh on far-curve contracts with little support coming from the gas market.

Gas prices have posted gains this morning as the system is 20mcm short, with the prompt adding 0.55ppt to its price to trade at 42ppt, while Front-Month increased to 41.6ppt. However, LNG supply remains healthy with a further two deliveries scheduled to arrive in the UK this week which could see prices fall this afternoon.

Small increases can be seen on the power curve this morning as colder overnight temperatures should contribute to higher demand levels;Day-Ahead displayed the biggest gain and rose by £0.60/MWh. Meanwhile, Brent has weakened further which has helped to curb some of the gains on the far-curve.

Market close data has revealed that the 1-year forward price for both commercial gas & commercial electricity recorded a small gain - closing at 42.45ppt and £42.65/MWh, respectively. This can be seen in the graph below. 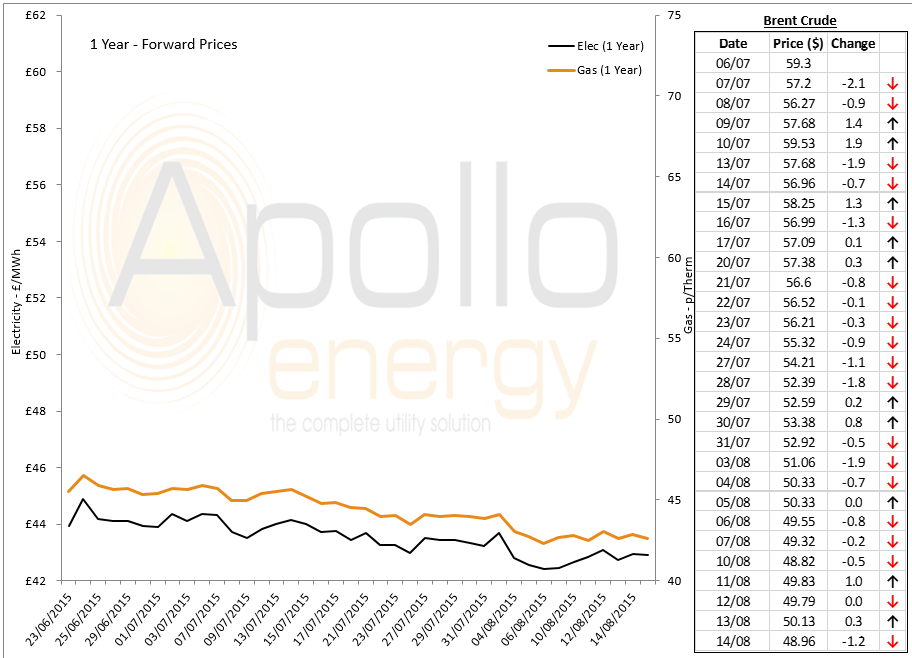 Brent 1st-nearby prices recorded further losses over the weekend and currently trade around $47.5/b; the weak Asian market remains the main influencing factor.