An improvement on the nuclear availability front should help spot prices turn bearish in the coming days, assisted by slightly milder temperatures tomorrow. In terms of gas, today's colder weather has given support to prices but as temperatures are expected to improve slightly as the week goes on we could see November-13 prices move down. Today's prices can also be found in an easy to read table on our 'current UK energy price' page.

Prompt contracts were slightly bullish on Friday as Norwegian deliveries to the NBP were the main driver of prices, maintenance at the Aldbrough facility and colder weather also played their part. Further along the curve seasonal contracts went up slightly as the British pound weakened against the Euro with Summer-14 rising by 0.30ppt to close at 64ppt. On the gas curve November-13 added £0.20/MWh to its price and ended the session at £53.80/MWh, while contracts further along the curve saw little movement as the wider fuels complex was largely unchanged.   A number of power plants returned online at the weekend which offset the Monday demand premium and Day-Ahead remained unchanged as a result.

Day-Ahead gas opened higher this morning following maintenance at the Aldbrough facility. An LNG delivery is expected to arrive in the UK on Friday while Front-Month contracts opened at a discount thanks to slightly milder temperatures on the continent. Power demand in the UK saw an increase on the back of cooler temperatures which led to the Day-Ahead contract climbing by £1.40/MWh. Seasonal contracts moved down slightly and took direction from their gas counterparts and lower APi2 coal prices.

Market close data has revealed that the 1-year forward price for both commercial gas & commercial electricity went up - closing at 66.81ppt and £52.40/MWh, respectively. This can be seen in the graph below. 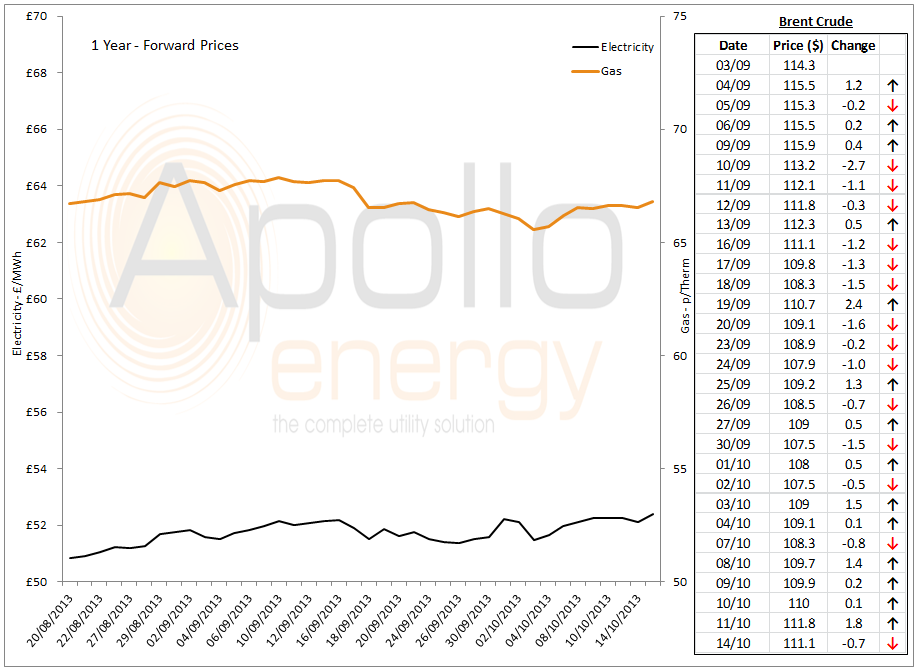 Brent 1st-nearby prices continue to trade above $111/b this morning as US shutdown negotiations are on-going; the release of strong import data from China also influenced oil prices.