Spot power prices climbed higher yesterday as a consequence of colder temperatures and a lower wind forecast. Gas prices also increased yesterday despite a well-supplied system, the colder weather which has led to higher demand was again the cause of the bullish movement. UK LDZ demand has fallen by 3mcm today and is slightly below the seasonal average. However the system has opened short due to a drop in Langeled flows and storage withdrawals might be required to provide balance, prices should move higher as a result. Today's prices can also be found in an easy to read table on our 'current UK energy price' page.

The UK gas system fell to 18mcm short following an outage at the Aldbrough facility which led to Day-Ahead adding 1.80ppt to its price at the end of the session. The short system was also largely affected by a decline in Langeled flows which decreased by 50mcm. Most power contracts registered gains on the back of stronger Brent prices. The increase in Brent and EUA prices led to near-curve power contracts taking an upward direction, with Front-Month rising by £0.15/MWh and Front-Season climbing £0.20/MWh higher. Movement along the curve was quite varied, Front-Quarter closed at a £0.10/MWh premium while Winter-15 fell by £0.30/MWh.

Day-Ahead gas opened 0.90ppt higher as the UK system remained short with Langeled flows decreasing yet again to a rate of 40mcm. A cold weather forecast for the second half of November has also had an effect on the market and demand levels are expected to grow. An LNG delivery has now been scheduled for November which should help to restrict any gains made by the Front-Month contract. The power curve took influence from gas with bullish movement observed across the board. Contracts further along the curve were pushed higher by a $0.25/tn increase by Front-Month coal. Day-Ahead went up by £2.50/MWh due to the weak wind production forecast for the next few days. However wind levels are expected to improve next week and should offset the loss of a 500MW nuclear reactor which will remain offline.

Market close data has revealed that the 1-year forward price for both commercial gas & commercial electricity moved higher - closing at 67.13ppt and £52.48/MWh, respectively. This can be seen in the graph below. 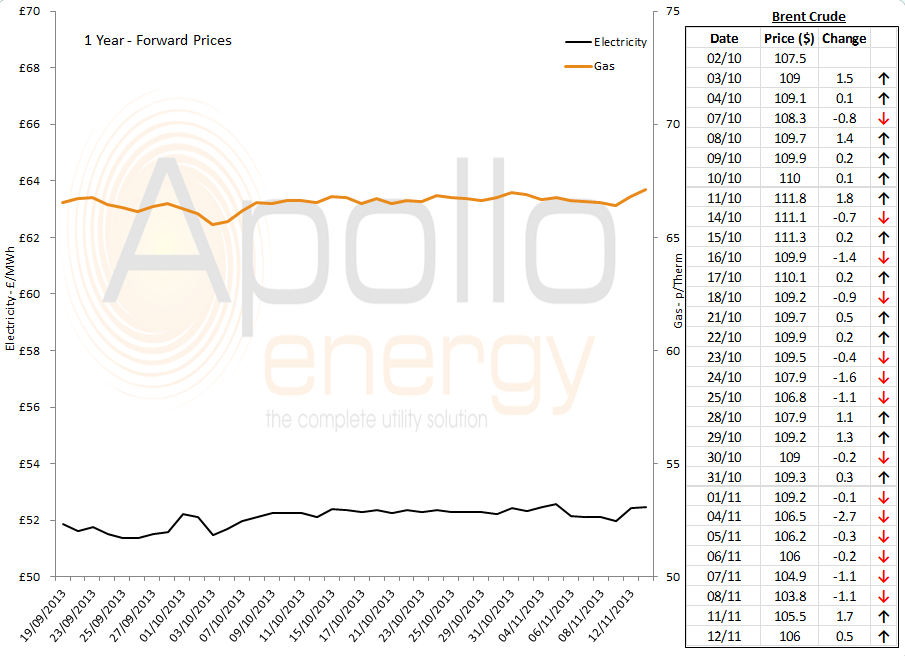 Brent 1st-nearby prices moved $1.28/b higher following a breakdown in talks regarding the Iranian nuclear programme; this gain means prices are now back above $106/b. WTI made a similar gain and the transatlantic spread now stands around -£11/b.