Spot power prices moved down yesterday on the back of stable fundamentals, with a milder weather forecast and healthy supply supporting the bears. Prices initially opened higher today and movement this afternoon will be dependent on the direction of the gas curve. Gas prices also decreased yesterday as demand levels are below average following a slight uptick in temperatures. Supply levels are lower today due to on-going maintenance which has led to a drop in Norwegian output and resulted in a short UK gas system; a rebound in prices is expected.

Numerous losses were observed on the gas curve yesterday due to an increase in Dutch imports and the return of a Norwegain gas field which had suffered an outage, BBL flows also ramped up to around 25mcm. Power prices followed their gas counterparts on Tuesday with Front-Month falling to its lowest price since July due to a revised weather forecast which shows a milder November. Further along the curve most prices also followed a bearish trend with weakening Brent providing additional downward pressure.

The UK gas system opened 20mcm short this morning with BBL flows falling from 25mcm to 9mcm. This led to a 0.75ppt increase for the Day-Ahead contract, while Brent opened at $80.90/b and helped to weigh on prices further along the curve. Power prices displayed mixed movement this morning with Day-Ahead and some far-curve prices opening lower and Front-Month contracts recording gains. Day-Ahead softened on the back of stronger wind production; which is 1GW higher than yesterday. A number of coal and nuclear power units have been reconnected to the national grid, while demand is also set to decrease as temperatures should remain above the seasonal average.

Market close data has revealed that the 1-year forward price for commercial gas decreased while commercial electricity displayed a gain - closing at 55.65ppt and £50.53/MWh, respectively. This can be seen in the graph below. 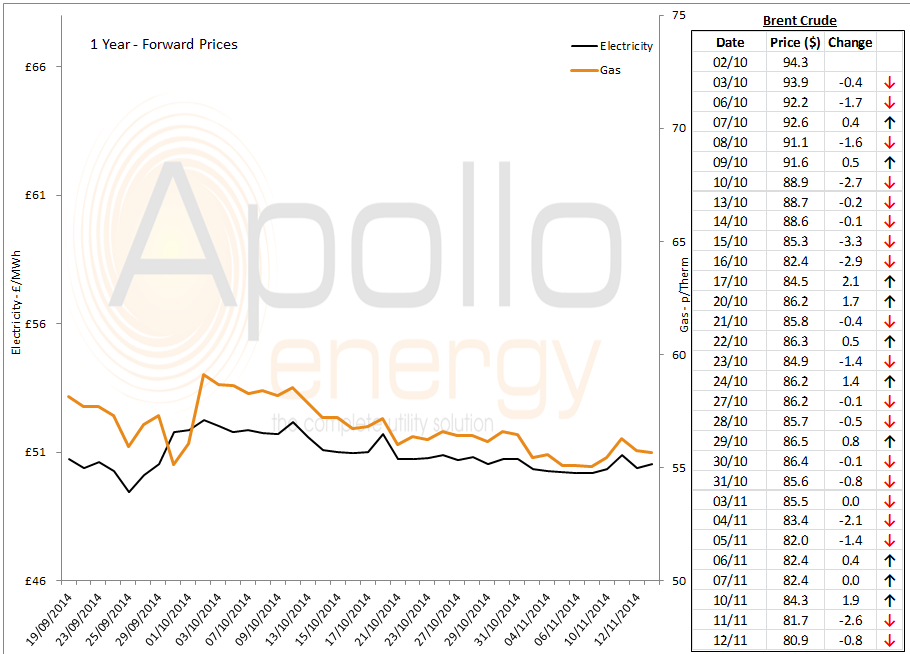 Brent 1st-nearby prices have fallen below $81/b and are close to their lowest point for four years. Prices continue to follow a downward trend despite new tensions in both Ukraine and Libya as over-supply remains the main market driver.