Spot prices held firm yesterday but should fall in the coming days as wind generation has been forecast to improve and milder weather is expected. Gas prices were also largely unchanged as demand levels are around average for this time of year and the UK system is well-supplied thanks to healthy Norwegian flows and increased storage withdrawals. Today UK LDZ demand is expected to fall by around 21mcm which would be 9.7% below the seasonal average. However additional storage withdrawals will be required as the UK system is currently under-supplied. Tomorrow, improved temperatures should reduce demand levels further and gas prices are expected to move down as a result. Today's prices can also be found in an easy to read table on our 'current UK energy price' page.

Day-Ahead gas failed to register any movement yesterday and ended the session at 69.50ppt. Linepack became balanced in the afternoon after starting the day short despite stronger flows from both interconnectors. Movement on the rest of the curve varied as monthly and some seasonal contracts dropped in price while Winter-14 climbed by 0.60ppt. On the power curve contracts followed gas with Day-Ahead showing no change, to close at £55.00/MWh as wind generation is expected to hold its current levels or increase slightly. Front-Month fell by £0.20/MWh as temperatures are expected to improve and the supply picture is currently healthy.

The UK gas system opened 19mcm short this morning following reduced flows from Langeled and St Fergus, despite this Day-Ahead managed to shed 0.20ppt from its price. Front-Month also moved 0.20ppt lower as the mild weather forecast going into next year continues to weigh on the contract. On the far curve most contracts fell slightly with losses ranging from 0.10ppt for Summer-15 and 0.70ppt for Winter-14. Prompt power prices opened lower and took influence from gas with Day-Ahead showing the biggest loss of £1.20/MWh. Further along the curve movement was rather subdued with Winter-14 and Winter-15 opening unchanged. Carbon prices were bearish with both EUA and CER contracts decreasing, as permit supply is currently having a larger influence than the recent vote for backloading.

Market close data has revealed that the 1-year forward price for both commercial gas & commercial electricity decreased - closing at 67.76ppt and £52.87/MWh, respectively. This can be seen in the graph below. 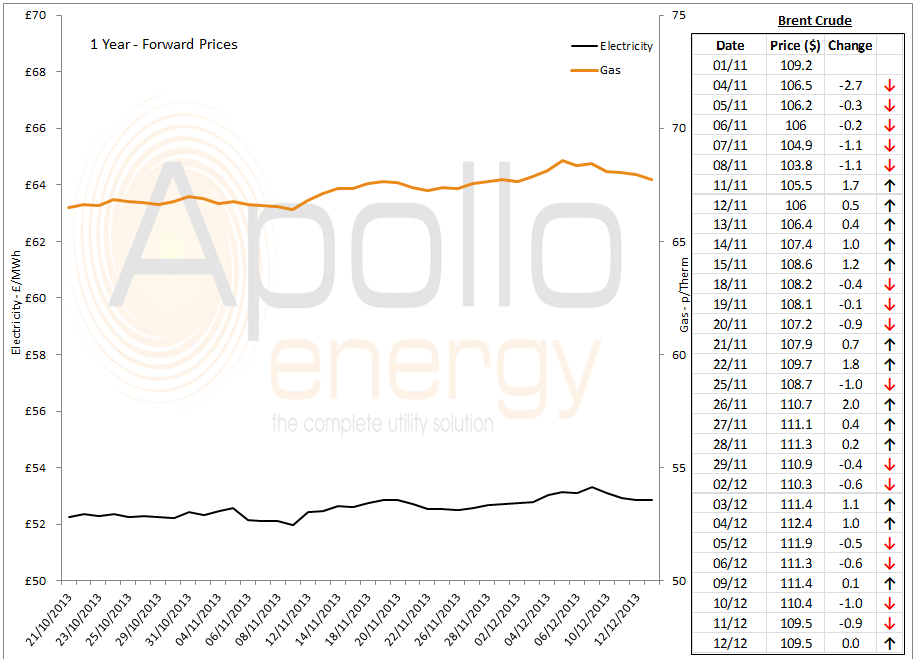 Brent 1st-nearby prices saw mixed movement yesterday, adding as much as $1.3/b earlier in the day but finally ended the session showing a $0.32/b increase, while WTI fell by $1.07/b. A bullish EIA report and US stocks data offered support to prices but any gains were restricted by US economic news relating to the budget.