Spot power prices remain at low levels as above average temperatures are expected to return which should weigh on demand. Elsewhere, renewable generation is very healthy in Europe, helped by high levels of wind over the weekend. Gas prices found some support from an unplanned outage in Norway on Friday, which resulted in a decrease in Langeled flows. Prices are expected to climb higher today as a storm in Norway has resulted in power failure at a number of gas facilities. Today's prices can also be found in an easy to read table on our 'current UK energy price' page.

Most gas contracts moved higher on Friday as an outage at the Norwegian Kbitbjorn field reduced overall gas flows coming into the UK. Flows via the Langeled pipeline dropped to 40mcm but the outage was resolved in the afternoon. Meanwhile, strong wind levels reduced the need for gas-fired generation and weaker Brent helped to weigh on some contracts. Power prices initially opened higher on Friday but recorded losses as the session progressed due to improved fundamentals. Day-Ahead displayed little movement as an expected rise in demand offset the effect of strong wind generation.

The gas curve has displayed numerous gains this morning with Day-Ahead the biggest mover, adding 1.60ppt to its price due to an increase in demand. Further along the curve seasonal contracts also climbed higher despite weak fuel prices. Day-Ahead power climbed £1.25/MWh higher this morning, while Q2-15 and Q3-15 increased by £0.20/MWh and £0.15/MWh, respectively. The majority of prices took direction from their gas counterparts and ignored healthy supply.

Market close data has revealed that the 1-year forward price for both commercial gas & commercial electricity made a small loss - closing at 47.13ppt and £44.80/MWh, respectively. This can be seen in the graph below. 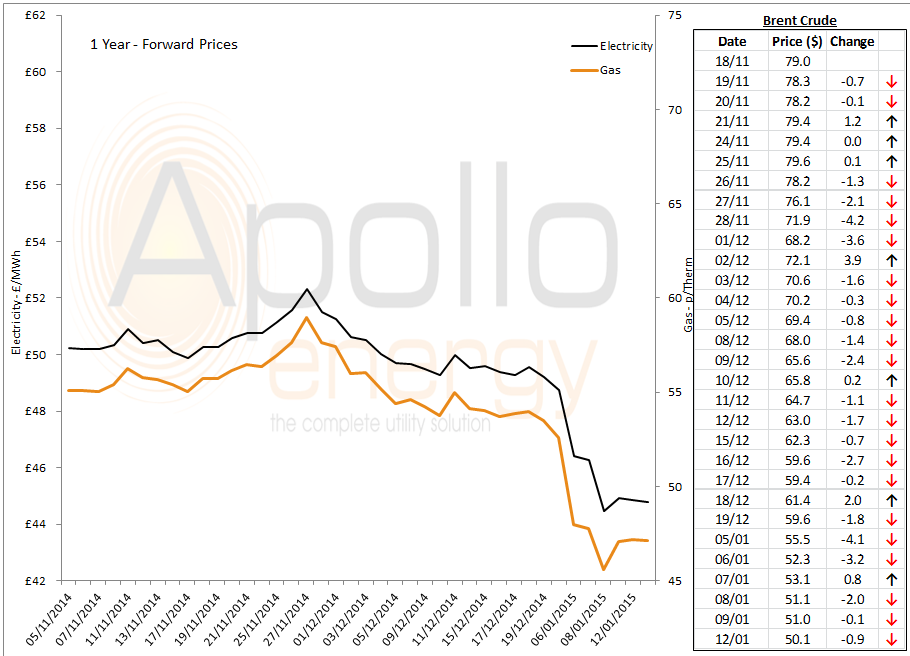 Brent 1st-nearby prices continued to weaken on Friday and fell to $48.7/b later in the session, their lowest point since April 2009. Prices are back above $50/b this morning but further downward movement is expected this afternoon.