Spot power prices display an upward trend at the start of this week, helped by a drop in wind generation today. However, power prices remain low for this time of year and further losses could be round the corner if general fundamentals recover. A drop in temperatures across Europe and a number of outages at Norwegian gas facilities pushed prices higher yesterday. Norwegian output continues to be restricted by outages this morning which has provided support to prices, in addition to higher demand. Today's prices can also be found in an easy to read table on our 'current UK energy price' page.

Gas prices were on the rise yesterday as an expected increase in demand due to a colder weather forecast supported the bulls, further support was also provided by numerous outages in Norway. Demand for domestic heating in the UK is expected to grow which helped Day-Ahead gas and other near-curve contracts record gains. Power prices also moved higher yesterday and followed their gas counterparts with an expected drop in temperatures the main driver. February-15 closed at its highest price for a week, closing at £41.45/MWh, while contracts further along the curve displayed smaller gains; slightly restricted by weakening coal.

Upward movement was displayed across the gas curve this morning with Front-Month contracts recording the largest gains as March-15 climbed 1.05ppt higher. Further out the gains were not as prominent as low fuel prices continue to provide some support to the bears. Day-Ahead power displayed the largest increase this morning and added £0.65/MWh, with most contracts opening at a premium. Stronger gas and a colder weather forecast continue to push prices higher.

Market close data has revealed that the 1-year forward price for both commercial gas & commercial electricity increased - closing at 47.35ppt and £44.95/MWh, respectively. This can be seen in the graph below. 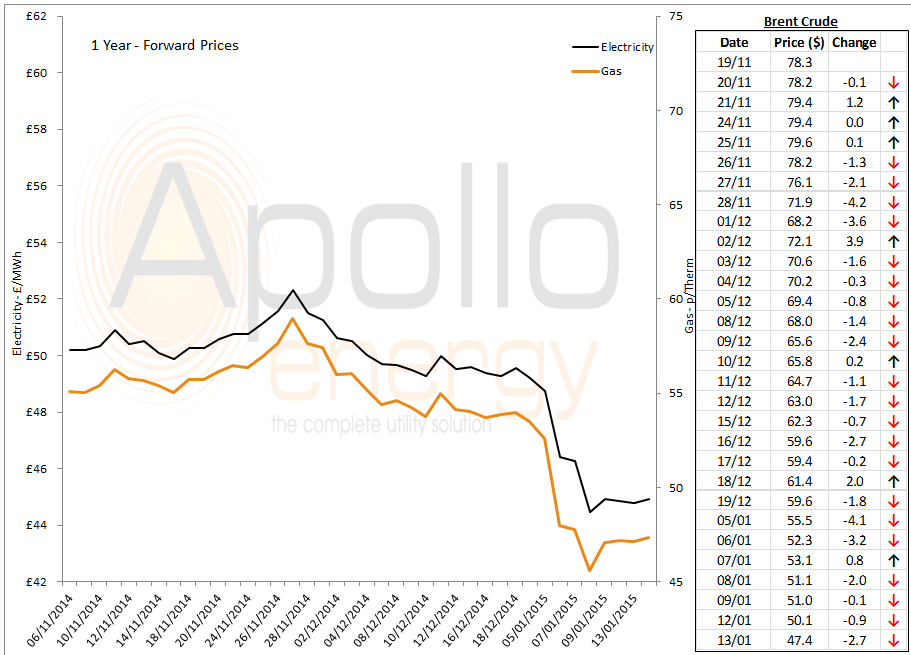 Brent 1st-nearby prices recorded a substantial loss yesterday of around $2.7/b, while WTI fell by $2.3/b. Brent now trades at $47.43/b as over-supply and a lack of demand has led to prices hitting a 6-year low.