European power fundamentals have seen little change in the last few days as hydro and thermal availability is ample and milder weather is expected until the end of the month. Carbon prices continue to weaken and if further losses are recorded we could see power prices decrease today. In terms of gas, demand levels were at their highest point so far this winter while an unplanned outage also occurred in Norway, helping gas prices increase yesterday. Today UK LDZ demand is 3mcm lower while Norwegian flows into the UK have improved; BBL flows also rose to 38mcm. Prices are expected to fall today as the improved supply picture has coincided with an improved weather forecast. Today's prices can also be found in an easy to read table on our 'current UK energy price' page.

The gas curve moved down yesterday with Day-Ahead closing at 61ppt, registering a loss of 0.50ppt. The UK gas system was short for most of the session while Langeled flows fell to 40mcm, although flows in general were largely unchanged. Most prices took influence from a revised weather forecast. Power prices also recorded losses with some contracts falling by as much as £0.75/MWh; strong wind generation helped Day-Ahead register the largest price-drop. Further along the curve the bearish tension was less visible with some seasonal contracts falling by £0.15/MWh.

Gas flows via Norway ramped back up to 72mcm after the outage at Kollsnes was resolved; flows had previously fallen to as low as 35mcm. The UK gas system was short once again this morning as withdrawals via Grain ceased. Day-Ahead ignored the short system and opened 0.20ppt lower as storage withdrawals were at a rate of 67mcm. Wind generation in Europe is expected to fall further on Friday after reaching extremely high levels last night; this forecast has helped Day-Ahead shed £1.00/MWh from its price. Weaker Front-Month Api2 coal helped seasonal contracts fall, while decreasing Brent also offered support to the bears.

Market close data has revealed that the 1-year forward price for both commercial gas & commercial electricity moved higher- closing at 63.25ppt and £50.10/MWh, respectively. This can be seen in the graph below. 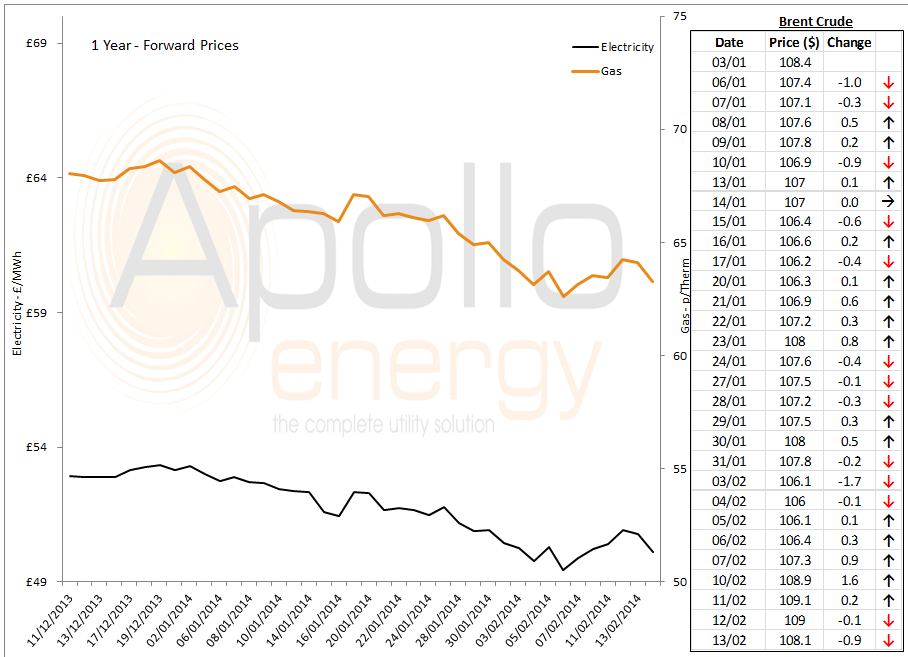 Brent 1st-nearby prices rallied higher yesterday morning and reached $109.5/b but fell later in the day to open up at $108.5/b today. WTI prices also moved down overnight and have fallen below the $100/b mark.