Spot power prices eased slightly yesterday as temperatures increased, however bullish pressure persisted across forward contracts. The power curve is likely to continue to gain support from the reduction in Dutch exports and the carbon market reforms, whilst a downward revision of March temperatures may provide further support.

Gas prices saw a sharp increase to a new 2015 high yesterday afternoon following uncertainty and ongoing debates over the Groningen production cap. An unplanned outage at the Norwegian Kollsnes plant and a further reduction in Dutch production cancelled out any bearish pressure the curve may have received from the peace deal between Ukraine and Russia.

Gas prices were volatile yesterday and remained under bullish pressure on Thursday. The main driver for the increase was the Dutch announcement of production caps at the Groningen gas field. Support was also gained from a reduction of almost two thirds from recent days in flows for the Netherlands and concerns that the UK may withdraw from storage to compensate for reduced Dutch flows.

Power prices were once again pushed higher by gas, reaching new highs for the year despite fundamentals looking bearish. Wind power generation is expected to significantly increase and demand decrease next week which helped Day-Ahead power prices trade down yesterday.

Spot gas prices received some bearish pressure from an oversupplied UK system this morning due to strong Norwegian production coupled with low demand. European markets however remain strained due to a lack of compensation for the further reductions in Dutch production, meaning any short term downward corrections will not be significant.

Market close data has revealed that the 1-year forward price for both commercial gas and electricity increased- closing at 51.93ppt and £47.60/MWh, respectively. This can be seen in the graph below. 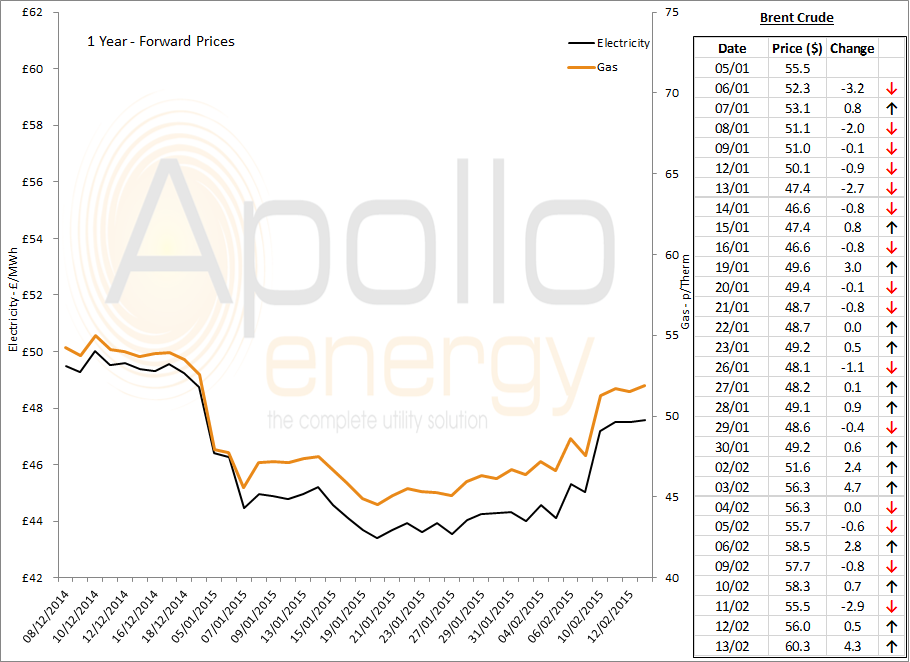 Brent prices made significant gains yesterday to over $60/b whilst WTI reached $52/b meaning that the Brent-WTI spread fell below -$7/b. Prices are expected to remain stable to bullish today.