European temperature forecasts are predicted to rise further this week keeping near-term contracts down and April contracts neutral today. The carbon market was at the forefront of yesterday's agenda and despite carrying forward some weakening potential for today, EUA Dec-13 contracts are likely to gain support shortly. The short UK system and continued lack of discernment over the Ukrainian crisis rallied NBP prices to rebound yesterday despite the strong bearish pressure from low demand across Europe. Langeled flows dropped to 54mm/day yesterday and intra-day demand, whilst showing some signs of growth, lingered well below the seasonal norm yesterday afternoon. Today's prices can also be found in an easy to read table on our 'current UK energy price' page

Gas prices made small gains yesterday on the back of tighter supplies, with Jun-14 gaining 0.80ppt and Win-14 adding 0.40ppt. The continued mild temperature forecasts and low demand have put bearish pressure on the gas curve for the remainder of March, providing some resilience to yesterday's gains. The power curve showed no distinctive trend yesterday. Day-Ahead closed at a £0.20/MWh loss despite low nuclear availability, whilst Front-Month contracts displayed more resistance. Weaker EU carbon prices did not offset the bullish impetus influencing the far-curve.

The gas curve opened at a premium again this morning, with Day-Ahead climbing 0.20ppt and Front-Season adding 0.40ppt to its price. Despite low demand and improved flows, Linepack opened 21mcm short today. Rough withdrawals mean that storage flows recovered 10% for the present gas day. Langeled flows increased to just below 70mcm with Norwegian flows contributing approximately one third of the UK flows. With wind generation predicted to be at its highest, for the week, on Friday (3GWh), Day-Ahead was the only contract along the power curve to show a discount. Increases were felt elsewhere on the curve, with Q3-14 making the largest gain of £1.00/MWh.

Market close data has revealed that the 1-year forward price for both commercial gas & commercial electricity increased slightly - closing at 62.65ppt and £50.25/MWh, respectively. This can be seen in the graph below. 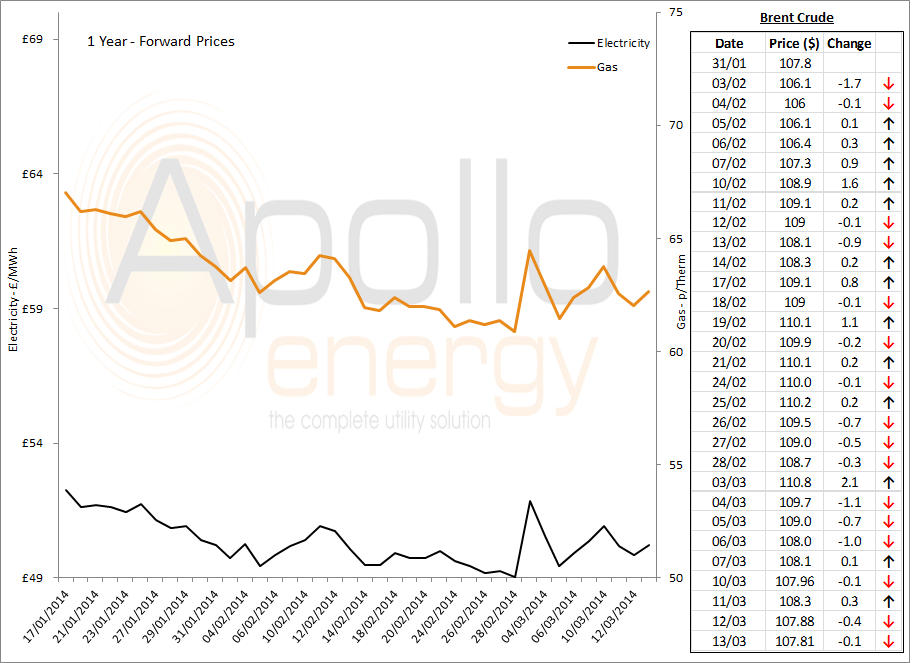 Brent maintained its position above the $108/b mark yesterday (-$0.53), gaining support from strengthened OPEC 2014 forecasts for global oil demand and the ongoing ambiguity over the Ukrainian situation. A WTI drop overnight is expected to place bearish pressure on Brent prices today. The US Oil benchmark saw its biggest drop in 2 months yesterday (over 2%) following an unanticipated proposal for a trial release of strategic oil reserves on the back of a large increase in crude stockpiles, as indicated by weekly data.